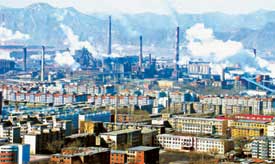 Environmental organisations and activists welcomed the measures but said the administration needs to implement them strongly. Experts say China's high level of economic growth is coming at an unacceptably high environmental price. "Local governments want better economic development in their area. So they sometimes do not pay enough attention to the environmental damage caused by the economic growth, said Wen Bo, program director of the us -based organisation Pacific Environment in China.

The announcement coincided with public warnings to 11 highly polluting factories, which came in the wake of the November 2005 chemical spill in the north-eastern Songhua river.