ONGC to resume mining in Nagaland 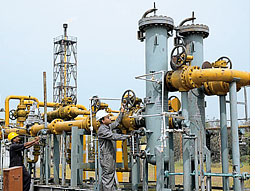 In 1994, the Nagaland government asked the Oil and Natural Gas Corporation (ongc) to shut shop in the state. Pressure from local people and militant groups had a big role in the decision. The country's largest crude oil producer is now set to resume operations in the north eastern state. It has signed a lease with the Nagaland government to revive petroleum mining in Changpang village in Wokha district. The state government claims to have resolved old issues but local people and militant groups dispute that. They have also raised the issue of pollution from oil wells.

ongc began explorations in Nagaland in 1973. Changpang with its rich crude oil deposits came in for special attention. According to the corporation, the village has 20 million tonnes of hydrocarbon reserves. Production began in 1981 but it stopped 13 years later.Local people and militant groups contended that land was leased to ongc in violation of Nagaland's special status under article 371 of the Constitution--no central government act pertaining to transfer of land applies to the state unless the state assembly ratifies it. They demanded an additional 2 per cent royalty for the state. Consent of local bodies, mandatory since most of Nagaland falls under Schedule vi of the Constitution, was also not taken, local people alleged.

The Nagaland government bowed to local pressure and put a stop to ongc's operations 14 years ago. But villagers continue to suffer from the after effects of oil mining. Leakage from the wells is a major problem. "We have to be extra careful while venturing into forests since a fire can break out anytime," says Opvuo Odyuo a resident of Changpang. A lot of agricultural land in the village has become barren, he adds.
Pollution is not the only problem in Changpang. The oil-rich village is starved of development. Electric poles were put up more than 10 years ago, but Changpang has not got electricity yet. Changpang got a small dispensary in 1960 but it lacks infrastructure to treat serious patients.

Villagers allege that very little of the oil royalty money has gone into local development. ongc has paid a royalty of Rs 33.83 crore for crude extracted from Changpang to the Nagaland government, but of that only Rs 67 lakh reached the village.

In 2006, some villagers felt that developmental issues could be addressed if local bodies had a say in oil mining. That year landowners with oil-bearing wells came together to form the All Lotha Resource Management Cooperative of Changpang (alrmcc). The cooperative held talks with Spice Resources Management, an affiliate of the Gurgaon-based corporate Spice Energy, to conduct oil exploration in Changpang. But the state government refused to allow the corporate any toehold in the state's oil sector.

The issue also drove a wedge in the local community. H Longshithung Kithan, the then chairperson of the village council, was alleged to have taken bribes from Spice Resources. Kithan had given alrmcc a mining lease for 25 years. According to the state government this violated section 12 of the Nagaland Village and Area Councils Act, 1978. Kithan was suspended from his post.

In November 2007, people of the Lotha tribe, the most populous tribe at Changpang, held a series of meetings, where it was agreed that areas held by members of the tribe will be made open for oil exploration and extraction. Nyanbemo Ngullie, chairperson of Lotha Hoho, the apex body of the tribe, said, "We have given consent to the government to issue mining leases since we believe that it is the right agency for the purpose." But Ngullie added that the state government should hold equal shares with any company involved in oil development. The apex body of the Lothas has also put another demand an oil refinery must be established in Nagaland.

But not all Lotho bodies are unequivocal about allowing ongc to explore in the area. Nzanthung K Yanthan, president of the influential Lotha Students Union, said,"We want development but it should be in a way which benefits local people. We don't have any objection if decisions are taken properly. But right now authorities are giving short shrift to issues of pollution and local development."
K Zhimomi, Nagaland's former industry minister believes, that oil exploration holds the key to Changpang's development. "It will also help the overall development of the state," he said. ongc has entered into a partnership with a Canada-based company Canaro Resource Limited to take up oil exploration in the state. The two companies signed a joint study agreement in June 2007. "ongc holds the licence to conduct oil exploration and production but Canaro will look after the actual operational aspects," Ankush Dutta the Indian spokesperson of the Canadian-based company said. Les Kondratoff, the company's ceo, believes the Nagaland operations could secure the company's position as the largest oil operator in north-east India. "People want good roads and better income generating activities. We can help them get these," he said.

But militant groups remain skeptical. The National Socialist Council of Nagaland, which had opposed ongc's activities in Nagaland 14 years ago, remains steadfast. "If ongc is so concerned about the people why don't they clean up its site?" Pungthing Shimrang, a senior member of the group's Issac Muviah faction asks (also see box Interview).

ongc is also planning to invest heavily in infrastructure at Changpang, there are plans to invest Rs 2,500 crore in revamping old installations and pipeline networks. An additional Rs 1,500 crore will be invested in drilling hi-tech wells.

But it seems that ongc has more than sludge on its hands.