Revised regional action plan launched for the conservation of the species, listed by IUCN as critically endangered 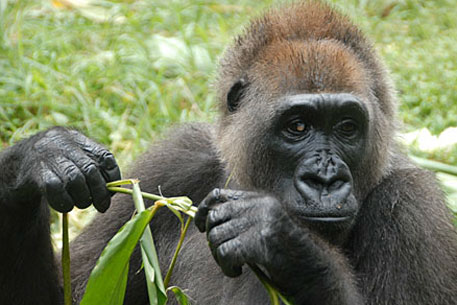 Africa’s rarest and most threatened ape, the Cross River gorilla, that inhabits a small area on the Nigeria-Cameroon border is on the brink of extinction. According to a recent estimate by Wildlife Conservation Society (WCS), their population has dwindled to around 100 in Nigeria.

"It is estimated that only 100 Cross River gorillas survive in Nigeria today, with an additional 200 in the adjacent forest of Cameroon,” said the Country Director of WCS, Andrew Dunn. He was speaking in in Calabar when the revised regional action plan for the conservation of the Cross River gorilla was launched, reports website, AllAfrica.com

IUCN, in 2008, had listed Cross River gorillas in the list of critically endangered species since the total number of mature individuals were estimated between 250 and 300. The reason for their continuing decline is widespread hunting for bush meat trade, habitat fragmentation and diseases such as Ebola and anthrax recorded among apes in the Cross River region of Cameroon and Nigeria.

One of four known subspecies of gorilla, Cross River gorillas most closely resemble western lowland gorillas but differ in the dimensions of their skulls and teeth. Researchers have also recognized a number of socio-ecological distinctions.

Like other gorillas, the Cross River Gorilla reproduces slowly, with females giving birth only once every four to five years.

A Revised Regional Action Plan for the Conservation of the Cross River Gorilla (Gorilla gorilla diehli) 2014-2019  developed by IUCN/SSC Primate Specialist Group and Wildlife Conservation Society has been launched to formulate a set of priority actions to improve the conservation status of the ape. The action plan aims at restoring the gorilla’s diminishing ecosystem, while at the same time educating villagers why these impeilled animals are worth protecting.