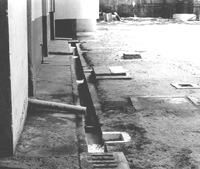 in the face of the worsening water crisis in the capital, the Delhi government's much-hyped rainwater harvesting programme is yet to take off. Last year, the chief minister, Sheila Dixit, had made rainwater harvesting mandatory for all Delhi government buildings. However, the plan is yet to be implemented. Out of the 1,000 government buildings, only one building has initiated rainwater harvesting. Officials from the city's Public Works Department pwd claim that preliminary surveys have been conducted for 15 buildings. But no tenders have been issued as yet. "The pwd does not have the required expertise and has to depend on the Central Ground Water Authority (CGWA) and the Delhi Jal Board," says a government official. "The concept is new and it takes time to sink in," says I M Singh, chief engineer of the pwd. cgwa officials, however, feel that the pwd is not doing enough to ensure that the work is completed. The CGWA recently directed a number of organisations in Delhi to adopt rooftop rainwater harvesting because of falling groundwater table (see Down To Earth , Vol 9, No 23, April 30, p8).