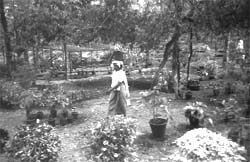 the Tropical Botanical Garden and Research Institute (tbgri), a Thiruvananthapuram-based autonomous research organisation under the department of science and technology, has exported medicinal plants to biotech firms in Singapore and Denmark without the prior consent of the Union government. This export was despite the 1992 Convention on Biological Diversity (cbd) which confers sovereign state right over biodiversity and a draft national law banning such exports without the Centre's consent.

Under the draft agreement, which was formulated by cnpr director Miranda G S Yap the transnational drug company holds the first right to commercial products developed from the plants. In the negotiations that followed with tbgri, it allows cnpr to offer such products to a 'third party'. The 'third party', in this case, is Glaxo Wellcome, one of the world's leading pharmaceutical companies. However, some senior scientists at tbgri allege that the institute's executive committee was not fully informed of this aspect of the deal. The Indian Biodiversity Forum comprising experts from the field of biotechnology has demanded legal action under the cbd to retrieve the plant extracts.