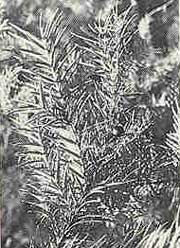 In response to the threat posed by multinational companies to the Himalayan yew (Taxus baccata), which yields the anti-cancer drug taxol, the Centre for Scientific and Industrial Research (CSIR) has launched a conservation programme for the tree.

Having depleted yew resources in the US, drug manufacturers have now turned to its Himalayan cousin, which is more vulnerable because it takes six Himalayan yew trees to yield as much taxol as is derived from one American yew.

Says Akshay Gupta, director of the CSIR complex in Palampur, "Limited research work has been done in India on the regeneration and management of the Himalayan yew." CSIR's new three-point strategy to save the yew includes domestic cultivation and propagation of the plant, developing the process for taxol extraction and evaluating taxol's medicinal properties. The programme will be coordinated by CSIR's Palampur unit, the Regional Research Laboratory in Jammu and the Central Drug Research Institute in Lucknow. The scientists will concentrate on finding a procedure to extract taxol from the yew's leaves rather than its bark because removal of the bark causes the tree to dry up.