Construction work on the Bangalore metro rail project is on amid protests from environmentalists. While activists say the project will lead to further traffic congestion, officials justify the project saying it will meet the increasing number of commuters. "Traffic surveys project peak hour, peak direction trips of about 40,000 people by 2021, and a metro rail system can meet the demand," says B L Yashavanth Chavan, superintendent engineer at Bangalore Metro Rail Corporation Ltd.

Environmentalists do not buy this argument. "The corporation has not taken proper environmental clearance with no proper impact analysis either. They are bluffing people," says Pramila M Nesargi, senior advocate, Pramila Associates, who has filed two petitions in the Karnataka High Court against the project. Studies conducted by iit, Delhi, indicate that rail-based transit systems are successful only when implemented in cities with high-density habitat with at least one major very high-density, high-rise-dominated central business district and are not appropriate for Asian cities, which are characterised by radial growth with relatively low-rise buildings, dispersed business districts and relatively low income.

Corporation officials go on the defensive saying it combines "comfort, safety and speed". "Energy requirement per passenger per km is only one-fifth of road-based systems; there will be no air pollution because the system will run on electric power and that the economic rate of return will be 22.3 per cent," an official says. Geetam Tiwari of Transportation Research and Injury Prevention Programme of iit, Delhi, says, however, "The energy consumption will be one-fifth of road-based transit if the system runs to capacity, which means the actual number of users are same as estimated users. Besides, the energy cost of the air conditioning in stations is not included." She says the actual number of users of Delhi metro is only 20 per cent of what was estimated and for Kolkata the figure is 10 per cent. Tiwari says economic returns will be negative.

The primary aim of the project is to encourage commuters to use public transport. "This will happen as the system will provide connectivity to the doorstep," says Chavan. "The project will work in tandem with other modes of transport and there will be a single ticketing system. Feeder bus services and a monorail system will be taken up by the corporation, will provide links to the metro stations," Chavan adds. Tiwari says these are tall claims. "Contrary to the belief that the number of buses will decrease, they will only increase. Also, monorail has never been used as a mass transport system. Its use is restricted to mostly airports or amusement parks," she says.
Traders and residents of Indiranagar have been objecting to constructions in the Chinmaya Mission Hospital road since 2005. They say the metro should be taken along the Old Madras road. The latter is wider and the former has many properties that will get affected, says Imtiaz Ahmed, president of the Traders and Shop-keepers Association. Speaking to Down To Earth, Chavan said that only four to five properties in the hospital road would be affected. Rajan Palaniyappan, of casumm, a local ngo, has done a detailed study of the area and he says around 1,500 properties will be affected if the metro were to pass through the hospital road. It is also technically unviable, says a report by a committee set up by the state government to look into the objections raised by people from hospital road and Indiranagar. 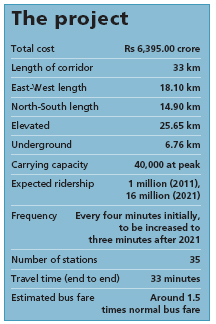 It said parking will be a problem and several properties will need to be demolished.

The report listed several problems which prompted a petition in the high court in November 2006. Project officials' claims that the hospital road will give the metro 15 per cent more commuters was contested in the petition saying the claims have no factual basis. The metro rail corporation, in turn, filed an objection in the high court on December 18, 2006. The corporation said it did not choose the Old Madras road because that would have an adverse impact on Taj Residency hotel.

People on the hospital road are unhappy about the compensation as well. "I started 17 years back by paying an advance of Rs 10,000 and the rent is Rs 6,000 per month. Where will I get this now? The rental allowance they are offering will not even suffice a month's rent elsewhere. The market rates are Rs 12,000 per sq ft, and the traders are being offered Rs 3,300 per sq ft," says Ram Mohan, a trader in the area.

However, another petition was filed in February 2007, highlighting the following:

Land acquisition was notified under the Karnataka Industrial Areas Development Act, 1966, which is not legal unless a change of land use (clu) is applied for and granted. In this case, there was no clu

Project approved under the Mysore Tramways Act, 1906, but metro rail is different from tramway

Approval for standard gauge; as per railway ministry policy, only broad gauge is allowed

Violates Environment Protection Act (1986) because Environment Impact Assessment (eia) not done properly. The corporation says it has done eia despite it being unnecessary. But that is not true because it comes under category 3 of "transportation" and also because it is a project above Rs 50 crore.

Metro construction started in January this year. The question people are asking is despite it being not viable, why is the project still continuing? "To serve vested interests," says Sudhir Badami, civil engineer and transportation analyst based in Mumbai.