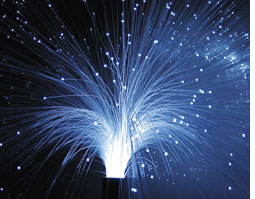 optical fibre has become the mode of choice for electronic data transfer. Transmission losses are much lower than in copper wire, and the speed much faster. A team at Duke University tried something new: store data in optical fibre, like in the random access memory (ram) of computers to cut energy loss. The experiment was successful, though only for 10 nanoseconds (nano means a billionth). The findings were published in Science (December 13, 2007).

Optical fibre is made of either glass or plastic and converts data into light pulses. But light cannot be stored. The Duke team discovered light pulses, which when converted to sound waves, can leave an imprint of the data on the optical fibre. For this conversion, the researchers passed two opposing laser beams through the same fibre. The opposing laser beams create vibrations called phonons, which are storable in the optical fibre.

To reconvert this stored data into light, a third laser beam is introduced into the optical fibre.

Is it a big deal to store data for 10 nanoseconds? Daniel Gauthier, lead author of the paper, says it is, considering that light pulses do not last for longer than 1 billionth of a second. The researchers will have to work on storing data for longer intervals. "Only a few applications might find useful a technology with such short storage time. The next breakthrough will be when data is stored in seconds," says Gauthier.

Before that scientists will have to overcome an obstacle: even while storing data for 10 nanoseconds, the laser pulses required to generate and read data require about 100 watts of power, which is too high for a computer. The technology will develop faster if it finds applications.