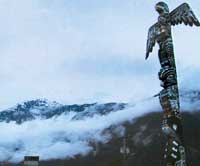 The Canadian indigenous community Xeni Gwet'in British Columbia has taken ancient myths to the courtroom as part of a trial in British Columbia's Supreme Court. Embroiled in a two-decade long battle with the Canadian government over the title to their land, Gwet'in elders testified about the traditional names for mountains and rivers in their region.

The Gwet'ins have claimed ownership of the rolling hills of Nemiah Valley, nestled in the snow-capped mountains of the wild Chilcotin region of British Columbia.

The Gwet'in's lawyers assert that Canadian law had confirmed that the aboriginal titles were based on law and history, and is a unique property right although it can be infringed if the government offers compelling reasons.

But according to Indian and Northern Affairs Canada, a government agency, court decisions so far have not resulted in a clear definition of native land rights. The case was first filed in 1989 over hunting and fishing rights.