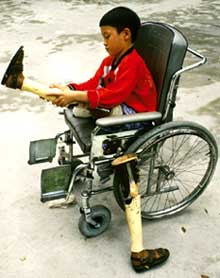 In a landmark judgement, the Seoul High Court has ordered two us -based chemical firms to pay over us $63 million as compensation to South Korea's Vietnam war veterans. The veterans, recruited by the us, were exposed to the defoliant, Agent Orange, used by the us army.

The court has directed Dow Chemical and Monsanto to pay damages to 6,795 of the 17,200 members of the Victims of Agent Orange Veterans Association of Korea and their families in response to a lawsuit filed in May 2002. The companies were found negligent in manufacturing the defoliant with excess dioxin content.

The two firms argue that they manufactured Agent Orange as per the specifications of the us army. They claim there was no scientific proof directly linking exposure to dioxins with various health problems. It is believed that both the companies might soon approach South Korea's Supreme Court (sc).

But the veterans say, "We welcome the ruling though it did not favour all of the victims... It would be difficult to overrule at the sc, if appealed," says Paek Young Yup, a lawyer who represents the veterans.

The judgement gives some hope to the Vietnam Association for Victims of Agent Orange, which represents over four million Vietnamese exposed to the defoliant and other toxic chemicals. The Vietnamese are fighting a lawsuit in the us . In March, 2005, us district judge Jack B Weinstein had dismissed their lawsuit ruling that Dow, Monsanto and other chemical manufacturers were not liable for damages caused by the spraying of Agent Orange ('Justice denied', Down To Earth, April 15, 2005).

Incidentally, in 1984, seven chemical companies, including Dow and Monsanto, had agreed to an out-of-court settlement worth us $180 million with the us veterans of the Vietnam war who claimed that Agent Orange had caused various health problems. Experts allege the us -based companies were clearly following double standards.