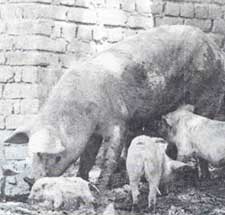 RESEARCHERS are contemplating the use of pig organs in order to overcome human donor organ shortage. The pig organs - such as hearts, kidneys, pancreatic glands - will be extensively researched and ready for use probably within 3 years, they contend.

Pigs have been selected because their organs are about the same size as human organs and are similar in shape and structure as well. Also, pigs produce large litters, and grow fast - maturing within 10 months.

But a foreign organ, when placed in a human body, is likely to be rejected by the body's immune system. So researchers have incorporated human genes in pigs to ensure that organs taken from such transgenic pigs are not attacked by the human immune system. More than 40 transgenic pigs have already been produce scientists (Spectrum, No 245).

Researcher David White, leader of the research team at Imutran Cambridge-based British company which is involved in developing genic pigs, says that when the work on the project in the mi was seen as science fiction. Bu years, scientists in other par world, too, realised the pot developing pigs as organ do now research centres in USA and JAPAN are also carrying out similar work.

For instance, Nextran in Princeton, New Jersey, a joint venture of Baxter Health Care Corp and DNX Corp, a Princeton-based biotechnology company, has also developed genetically altered pigs. Organs from these transgenic pigs are being used in baboon transplant experiments at Duke University in Durham, North Carolina. As baboons are closely related to humans, the results can prove useful. Says Jeffrey L Platt, the Duke tion issues such as approval of human experiments by the us Food and Drug Administration and other regulators.

Alexion Pharmaceuticals Inc at New Haven, Connecticut, is yet another biotechnology company that is breeding pigs incorporating human genes. University researchers in New York and Oklahoma are working with Stephen Squinto, Vice President (Research), Alexion. They are testing pig hearts, livers and lungs on primates - the highest order of mammals. Initial results show that the pig organs function as long as 48 hours in primates. In earlier experiments, when the human genes were not incorporated, grafted pig hearts in baboons were rejected in 60 to 90 minutes.

The concept of developing pigs as organ donors has not been welcomed universally - animal rights organisations have strongly opposed it, However, John Wallwork, Director of the Transplant Unit at Papworth hospital, near Cambridge, says that, "Only animal donors can close the gap and put an end to unethical practices of the impoverished selling kidneys to rich recipients in need of them, and to distressed relatives immediately after a sudden death having to face the ordeal of requests by surgeons for permission to remove organs for use as transplants,"

Adds John W Fabre of the University of London, England, "In societies where animals are killed in tens of millions for food ... it would be difficult to argue on ethical grounds for a proscription on the killing of a tiny number of pigs to save the lives and restore the health of sick and dying patients."