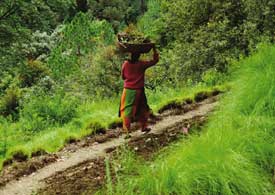 It's not routine for organic to get a bad press. But when quixotic officials turn it into an article of faith without doing the homework, the repercussions can be seriously debilitating.

Take the case of the hill village of Papnaikothar in Ranikhet district. It was well known for the excellence of its bounteous harvests, which, unfortunately, turned out to be its downfall. In 2002, when the Uttaranchal government launched a programme to push organic farming, Papnaikothar was on the list of villages that would be in the advance guard of the new, certified organic revolution, never mind it had always been organic. That's when the village started to go downhill. Sixty-two-year-old Kailash Papnai, who heads the village organic committee, says, "The villagers were euphoric when the subsidised organic farming concept came into being. We were promised up to 75 per cent subsidy and great returns after three years, but now we neither have the subsidy nor the productivity."

The village changed its cropping pattern growing paddy instead of coarse cereals and traditional vegetables. They had little choice. The programme stipulated that subsidies -- for irrigation and inputs like manure -- were tied to conditions, including the choice of crops, which the government could dictate. For paddy, farmers had to spend a large part of their savings to put in place the infrastructure needed for irrigation. But in a water-deficient area it wasn't anywhere near enough. "We depend on a local nala (small stream). Before the new organic regime we were not short of water because the crop was rainfed, but now we realise that the water we get can provide for only 25 per cent of our irrigation needs," says Himanshu Papnai, another organic farmer. For the past two years, the state has been suffering from drought, which has hit the farmers badly. The fact that the village has paid hefty sums to 11 international organic consultants to certify the village's organic credentials hasn't helped.

"The state has not provided us any subsidy for the expenditure we incurred in going organic. It has also not found buyers for our produce. Where do we go now?" asks 81-year-old Tahar Papnai. There is an air of desperation. "I have heard about farmers' suicides in Andhra Pradesh and Maharashtra. We may follow them soon," says Harishchandra Papnai, a young farmer.

Since its formation in November 2000, Uttaranchal has pursued an aggressive campaign to become the first fully organic state in India. A managing body -- the Uttaranchal Organic Commodity Board (uocb) -- was formed in 2003 to spearhead it. But three years later the organic revolution has led to an agrarian crisis.

"We want to make Uttaranchal like Switzerland, prosperous, organic, with a series of valleys of strawberry, plum and Basmati rice. This will earn Uttaranchal huge amounts of foreign exchange," says R S Tolia, former chief secretary. But Tolia's movement has come in for some criticism. "The organic model in Uttaranchal...is lifted mostly from Europe, which is meant for consultant-driven, large-scale farming for high-value crops," says Samuel Moser, project coordinator, Asia, for Forschungsinstitut fr biologischen Landbau, Switzerland, an international institute promoting organic agriculture (see interview Major hurdles). "The problem is that we are just adopting the methods blindly without accepting ground realities," says O P S Khola, a senior scientist with the Central Soil and Water Conservation Research Institute (cswcri), Dehradun. Traditional organic farming did not pose problems, but the new model has not been fine-tuned.

Officials may have a millenarian vision, but like most prophets, they have failed to take care of the basics.In most villages where farmers are joining this new organic wave, there are two big problems in production water and manure. Organic requires farmyard manure, mostly cattle dung, for which women have to carry fodder for cattle over long distances. Formal organic requires more manure because there is no use of chemical fertiliser.

"Every 100 kg of urea contains 60 kg of nitrogen while every 100 kg of manure contains only 0.5 kg of nitrogen. So we require at least 30,000 kg of manure for a hectare of land," says K S Dadhwal, head of the soil and agronomy department, cswcri. This works out to the dung of 30 cows over six months, which is unaffordable, if in the first place it is available, for farmers who hardly have a cattle head or two. "Even if we had more cattle, we would not have enough fodder and water for them," says a farmer in Papnaikothar. "By talking against manure we don't say that urea is good. We hardly used chemical fertilisers earlier, but certifying agencies insist we maintain the carbon/nitrogen ratio by using adequate amounts of manure to sell our organic products in the global market," says Himanshu Papnai.

Officials are, however, gung-ho. Binita Shah, senior manger of uocb, says, "The villagers are sceptical, but if manure is a problem we'll bring about a cattle revolution in the state. There can be no compromise on converting every farm into an organic farm."

Farmers have similar complaints about bio-fertilisers and micronutrients, which they are asked to apply in specified dosage. But uocb officials are not bothered; they term it a minor problem, since there are suppliers from Haryana, Punjab and Uttar Pradesh.

What it all adds up to is falling yields, dipping profits. Sukhdev Singh of Jashpur village in Udhamsingh Nagar district says after going organic his wheat and paddy yields dipped by 80 per cent in the first year. After three years of organic farming it's still half the pre-organic figure. Ghanshyam Thakur of Dehradun shares similar experiences.

Besides nutrient costs, the increased cost of production is due to factors like intensive labour and certification costs. The experiment also involves sprinklers, drip irrigation and greenhouses, all costly propositions. The official reaction is to summon a deus ex machina. "Let the rural landscape resemble Israel's; let farmers have enough water," says Shah.


If the production end is a problem, the marketing side of operations is an equally big headache. "When the state promoted organic farming we were promised a premium as high as 50 per cent on our produce which would help us subsidise losses, but not a single buyer turned up and we had to ferry our produce to the Ranikhet market and sell at throwaway prices," says Kailash Papnai. The buyers have their problems. "We can't reach everywhere a village goes organic. We need contiguous clusters or valleys, good roads, storage infrastructure and a proper scale of production to make it worth our while," says Vinod Vaishnav, general manager, agri-business, Reliance Industries Limited.

In some cases, traders renege on contracts, with impunity. Satnam Overseas, a large trading house, walked out of its contract to buy organic rice from farmers in Dehradun and Udhamsingh Nagar. Ghanshyam Thakur whose model village in Dehradun was a victim, says, " uocb manages the contracts. But when a private party breaches a contract there is no support from it. We had to sell all our produce in the local market."

Certification is another problem. There are 31 international organic certification agencies with franchisees in India. They follow norms based mostly on European experiences. "The problem with certification is that if your farm is certified by some agency from the Netherlands, British importers won't accept it. They will ask for another certification from a British agency. Since our exports are small and goes to many countries we need certificates from everyone," says Anand Rawat, an organic trader.

Certification costs can be as high as Rs 15,000 per hectare. P V S M Gouri, advisor, Agricultural and Processed Food Products Export Development Authority, says, however, that prices will fall with group certification for small farmers.


Officials are firm in their revolutionary spirit. Tolia says, "Organic revolution will be brought at any cost. The problem is not with management, nutrient or certification, it lies in the mind of the farmers. We need to overcome that fear, for which we will get successful, spirited farmers from Punjab and Haryana who have entrepreneurial skills and risk-taking capacity. They will imbibe such spirit in our farmers."

While visionaries dream, farmers are stuck with mundane concerns. "Where are they going to get the dung?" asks Mari Devi of Papnaikothar.