Contradictory state of affairs in two Uttaranchal villages highlights both potential and obstacles of organic farming. The paradox has cropped up despite two ongoing government-run programmes in the hill state to propagate the process... 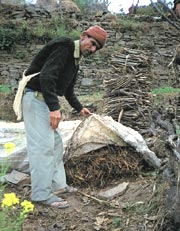 Dhanpao village: Two patches of land adjacent to each other. Wheat is sown on both tracts. But while one yields numerous saplings, the other is barren. The reason: organic manure was used in the lush green field to grow ginger before wheat was planted.

Lachiwala village: A mound of organic manure lies dumped on government land for many months. The reason: villagers have yet to find a buyer.

This contradictory state of affairs in two villages of Uttaranchal highlights the potential of organic farming on the one hand, and the obstacles to reaping its benefits on the other. The paradox has cropped up despite two ongoing government-run programmes in the hill state to propagate the process. Now, with a view to formulating a coherent strategy on the farming technique, a proposal is being presented to the Uttaranchal cabinet to set up an organic board. The panel would comprise representatives from the farming community, private enterprise and government, and will act as a nodal agency to boost organic agriculture in the state.

Notwithstanding the shortcomings of the current schemes, they have helped modestly in spreading awareness about new technologies. While the Training and Technology Development Centres (ttdc) is an income-generation programme for below poverty line (bpl) families, the other project promotes 'bio-villages'. ttdc is being implemented as a part of the centrally sponsored Swarnajayanti Gramin Rojgar Yojana . The state agriculture department is in charge of the 'bio-village' scheme, which comes under the Union government's Macro Mode Project. Two private companies, supa Biotech and Maple Organics, are implementing the project.
ttdc seeks to improve traditional composting techniques to produce manure, which bpl families with an average landholding of 0.1 hectare (ha) can sell to boost their earnings. Its success is, however, predicated on subsidies.

The process involves training farmers to make heaps of biomass in accordance with certain size specifications, and introducing inoculums (culture of micro-organisms) that will help in quick decomposition of biomass. Two processes are being used under the programme to make compost -- the biodynamic (bd) method and the effective micro-organisms (em) technology. In the former, inoculums are made by naturally fermenting certain herbs and viscera of dead animals. The compost thus prepared takes significantly less time to decompose, and is ready in 45-60 days. em technology, on the other hand, uses a liquid concentrate made by collecting and growing natural micro-organisms like photosynthetic bacteria (Rhodopseudomonas spp). supa Biotech and Maple Organics manufacture bd and em inoculums, respectively.

The first part of target-based ttdc commenced in March 2001 in three districts, and the second phase got underway in November 2001 in the other 10 districts. In the two-year-long first part, as many as 1440 people have been trained. "The beneficiaries are required to make 30 heaps of manure each and master trainers (mts) coordinate its sale at the block level ," explains Binita Shah, technical coordinator, ttdc, Kumaon. She also runs supa Biotech.

"About 1200 kilogrammes (kg) of biomass are required to make a heap, which gives 500 kg of manure on an average. Beneficiaries can get Rs 500 per heap if they sell the manure even at Re 1 per kg," points out N C Upadhyay, technical officer, ttdc/Bio-villages, Kumaon region. However, actual sales figures tell a different tale. For instance, in Kumaon only 1212 heaps out of the 20,374 used were sold in ttdc-ii till November 15, 2002. Moreover, only about 13 per cent heaps have been sold outside, highlighting a weak linkage with the market.

Reena Chamoli of Lachiwala village, which is covered by ttdc-i, explains: "It is difficult to sell the compost. The first time the mt got us an order at the rate of Rs 2 per kg. Subsequently, however, we got only Re 1 per kg. There is still a lot of manure lying waste." Only in a few cases, mostly exhibitions, has the compost fetched up to Rs 3-4 per kg.

Roopchand Singh of Bhaintan says, "We don't sell the manure because the returns are not commensurate with the time and energy invested." Another villager from Bhaintan, who is not involved in the programme, avers: "The price offered should be attractive." It is doubtful if people will continue to make extra compost to sell when the freebies stop. "At present, farmers are supplied inoculums such as bd preparations and em concentrate free of cost. Tools and equipment are also provided. Apart from this, they get Rs 125 per heap as labour charges," reveals Upadhyay.

H B Thapliyal, officer on special duty, project monitoring unit, is candid: "After achieving the target, we had hoped that more manure would be produced. But that has not happened." There are plans to create a revolving fund to help farmers' groups make compost once they secure an order.

mts feel that the "lack of a marketing set-up" is the biggest lacuna in the scheme. "The money allocated for marketing centres under ttdc-i was not utilised immediately because we wanted to see how the programme progresses," says R S Tolia, commissioner, forest and rural development, Uttaranchal. A move is afoot to set up these centres now in every district.

Some people opine that restricting the programme to the bpl category is self-defeating. "Those below the poverty line have a fewer number of cattle, so they cannot make enough manure to sell," feels Manjit Kaur, a villager.


Under the other project, which started in March 2002, there are two bio-villages per block in 13 districts. "Fifteen bpl farmers are selected in each village and training is imparted in various techniques needed for organic farming," reveals Shah. "We try to pick farmers with abutting lands so that the entire stretch can be cultivated organically and certification becomes easier," says Sanjay Aggarwal of Maple Organics.

Under the state government's bio-village programme, all beneficiaries are trained to make compost heaps, liquid manure (using cow urine and neem leaves), cow pat pit (a mixture of cow dung, molasses and egg shells) and vermi-compost. These are used for various purposes during different stages of the crop cycle. "Each farmer gets material worth Rs 400 in the form of inoculums, earthworms, tools and equipment," says Upadhyay.

"It requires about 1000 litres of water to make manure in this form. We want to showcase the project as a model, so we have not selected villages where water is difficult to tap," discloses Upadhyay. P S Ramakrishnan of the School of Environmental Sciences, Jawaharlal Nehru University, highlights the problems inherent in such efforts: "Model villages are subsidised by heavy monetary inputs from outside sources. How can it be ensured that any success achieved by the programme will necessarily be replicated on a large scale?"

It is felt that the state should strengthen the marketing network to fully realise the benefits of the concept. "Farmers at high altitudes ask 'what is new in this programme? We already do organic cultivation.' What is needed is a market for their produce," opines A N Purohit, botanist and ex-vice-chancellor, Garhwal University. He adds: "The yield at high altitudes is less compared to that in the plains where fertilisers are used intensively. If the organic produce fetches a high price, people will stand to gain (see box: Return of Doon basmati )."

Others feel it is an instance of making the farmer lean on technology controlled by private sector. "Farmers are already dependent on companies for seeds. Will it be advisable for them to look up to the private players for inoculums as well?" asks Kunwar Prasoon, a Tehri-based veteran Chipko leader.

The current projects need to be overhauled, not fine-tuned, to ensure the sustainability of organic farming in Uttaranchal. An uphill task for sure.