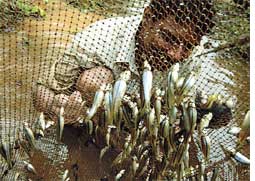 THE Food and Agriculture Organization (fao) has called for doubling aquaculture output to feed the world's growing population. fao believes this would curb fish harvesting from the wild and prevent further decline of wild stocks.

Environmentalists criticized the fao saying its solution is rather simplistic. First of all, aquaculture uses small fish species as feed for the larger ones, they pointed out. The food requirement of predatory fish like tuna is very high, they said. Second, antibiotics and growth enhancing hormones are used in fish farms to increase the bulk of fish. Use of these chemicals has adverse effects on the environment and other species. Third, there is high disease incidence due to overcrowding in fish farms. "It doesn't make sense to catch fish to feed fish--you lose four to five times the weight and that's without all the infestations, fish escapes and pollution from the farms," said Willie Mackenzie of Greenpeace, one of the non-profits that have criticized fao's stand on aquaculture. 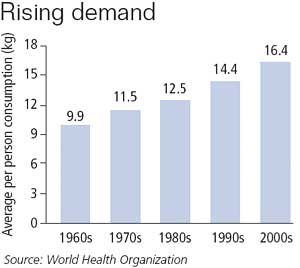 The protests from green groups made fao amend its statement. It later stressed aquaculture should be voluntary and sustainable. Fisheries scientists in India suggested aquaculture could also be used as a conservation method. "We could use some wild stock for breeding purposes. The caveat is that such fish farms should not use chemicals," said G Syda Rao, director of the Central Marine Fisheries Institute at Kochi.

About 52 million tonnes of fish, half the amount consumed around the globe in a year, is sourced from fish farms.