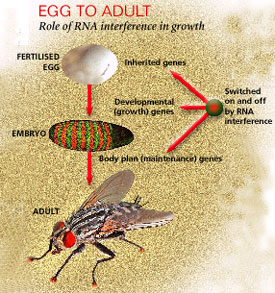 in perhaps the most significant contribution to the world of science from India in recent years, a team of researchers from Hyderabad has helped resolve the mystery of how animals grow from a fertilised egg.

It is well known that cells differentiate and proliferate to form various organs that a mature organism possesses. In this scheme of things, proteins play a crucial role -- they regulate and trigger the expression of various genes, or the functional units of dna, so that the organism grows as pre-determined. Different genes need to be expressed at different stages of growth and maintenance of the body.

A growing organism has to contend with two types of genes -- active and "silent" ones. While the active ones -- which are involved in the formation of that particular organ -- are to be switched on, the other set has to be shut off. For instance, the genes that are active in the formation of the ears are inactive during the growth of the nose and vice versa. Till recently, scientists believed that a type of protein called polycomb group protein, did this "silencing" act on its own.

But, now, for the first time, a scientist couple -- Utpal Bhadra and Manika Pal-Bhadra -- jointly with their French collaborators, has shown that proteins are not alone in executing growth and maintenance plans. In a paper published in the March 10 issue of the prestigious journal Cell (Vol 124, No 5), they reported that another biological entity, called rna Interference (rnai), is involved in regulating gene expression during various stages of development of an organism.

While Utpal works with the Centre for Cellular and Molecular Biology, his wife Manika works for the Indian Institute of Chemical Technology. Both the laboratories belong to the Council of Scientific and Industrial Research.

The Indian couple, together with Giacomo Cavalli and colleagues at the Montpellier Cedex-based Institute of Human Genetics in France, conducted experiments on fruit flies. The scientists artificially introduced a hybrid gene carrying eye colour pigmentation and wing blade formation genes on two chromosomes. They found that the rnai machinery brought the chromosomes containing the hybrid gene together. Further, this bringing together or clustering resulted in rapid reduction of the traits defined by the hybrid gene in the successive generations of fruit flies.

According to the scientists, rna i plays a critical role in hoarding away genes that are not required for defining the specific functions of a particular cell by clustering them. This is essential for the normal development and maintenance of the organism. "Our study revealed that rna i not only controls genes, but it brings chromosomes together. In a way, it controls the switch-on and switch-off mechanism for regulating the body plan and development proteins," says Utpal Bhadra.

One of the two nucleic acids, rna does not have the double-helix structure of its famous cousin -- dna. Rather, it has a single chain that folds into different shapes, depending on the requirement. Its major role is to carry the message contained in the genes into translational machinery called ribosomes to decode gene based signals into proteins.

Scientists chanced upon rnai machinery in the early 1990s when they were trying to produce petunia plants with improved flower colours. They had introduced additional copies of a gene encoding a key enzyme for flower pigmentation into petunia plants. To their surprise, many of the petunia plants carrying additional copies of this gene did not show the expected deep purple or deep red flowers but put out fully white or partially white flowers. When the scientists had a closer look, they discovered that both types of genes, the endogenous (its own) and the newly introduced transgenes, had been switched off. But, they could not unravel the molecular mechanism behind the phenomenon.

Years later, scientists successfully repeated similar experiments with short regions of rna sequence in plant viruses as well as roundworm. This "gene silencing" thus came to be known as rnai.

In 1997, the Bhadras had published a paper in Cell (Vol 90, No 3) elaborating on this molecular mechanism and demonstrating that adding more gene copies can produce more gene products, but only up to a point. Beyond this, gene silencing starts.

The scientists believe that the rnai mechanism can play a significant role in gene therapy. " rna i has a capacity to destroy any genetic material at any time in any specific type of cell, and is considered the most powerful gene knockout system," says Utpal.

A vast number of hereditary illnesses, certain types of cancers and neuro-degenerative diseases such as Alzheimer's disease can benefit from rna i. What scientists will need to do is to identify a genetic sequence similar to that of the defective one implicated in a particular disease and introduce the same into the cellular assembly to trigger gene silencing.