In a move that threatens to dislocate the lives of millions of Orissa's tribal people, the state government has decided to allow transfer of land in fifth schedule areas for mining and industrial operations. En route, it has interpreted the Supreme Court's landmark Samata judgement of 1997 to suit itself 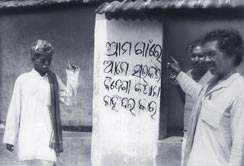 In a move that threatens to dislocate the lives of millions of Orissa's tribal people, the state government has decided to allow transfer of land in fifth schedule areas for mining and industrial operations. En route, it has interpreted the Supreme Court's (sc) landmark Samata judgement of 1997 to suit itself.

The apex court had ruled in the Samata versus state of Andhra Pradesh (ap) case that tribal tracts and forestland in scheduled areas were not to be leased out to non-tribals for mining and industrial activity, as this would contravene the fifth schedule of the Constitution. According to the sc directive, such operations could only be permitted exceptionally -- subject to the laws of the state concerned. The sc had stipulated that in instances where the law does not completely ban mining in scheduled areas, a state-level cabinet sub-committee should be constituted and a suitable decision taken thereafter.

During the second week of July 2003, a sub-committee -- headed by Orissa chief minister (cm) Naveen Patnaik -- conveniently concluded that the judgment was not binding on the state. "The inference is totally erroneous because the apex court's ruling is obligatory for all states," contends Rajeev Dhavan, the sc advocate who represented Samata -- a social action group of ap.

The Orissa sub-panel's decision was premised on the claim that ample provision had been made in the state's existing laws to protect tribal interests. The rules cited in this regard were the Orissa Scheduled Areas Transfer of Immovable Property (Scheduled Tribes) Regulation (osatipr), 1956, and the Orissa Zilla Parishad (Amendment) Act, 1997.

"The state government has mentioned these two laws to give its dubious agenda a veneer of legitimacy," alleges Bibhu P Tripathi, an Orissa-based advocate. But the fact that certain clauses of osatipr itself forbid transfer of land from tribals to non-tribals, weakens the authorities' case further. "The Orissa government is not even conversant with its own laws," asserts Tripathi.

Highlighting the ludicrousness of the cabinet sub-committee's stand, he elaborates: "It goes against the grain of a recent amendment to osatipr. The new clause, inserted in 2002, explicitly states that no member of the scheduled tribes can transfer any land if the size of their holding gets reduced to less than 2 acres (0.8 hectares) of irrigated land or 5 acres (2 hectares) of non-irrigated tract in the process." Tripathi observes: "The suggestion of the sub-panel will, in effect, violate the regulation because tribal families would be left with no land at all." Ravi Rebba Pragada of Samata, Hyderabad, wonders: "How will the state government arrange for more land to rehabilitate the displaced tribals?"

The zilla parishad act safeguards the tribal people's rights even more stringently. "Notwithstanding anything contrary in this act or any other law, no prospect licence or mining lease for minor minerals or concession for the exploitation of minor minerals by auction shall be granted under any law ... except with the prior recommendation of the parishad," it notes. The state's past record indicates that tribal communities will not be consulted on the issue.

"Rather than regarding the Samata case as a point of reference and insulating tribals, the Orissa government has paved the way for mining in scheduled areas by signing a memorandum of understanding with private companies," charges Tripathi. "The decision will shut out local people by divesting them of their land, and open the floodgates to multinationals," laments Krushna C Sounta of Prakrutika Sampada Suraksha Samiti -- an Orissa-based tribal rights group. A terse A S Sarangi, principal secretary in the state's scheduled castes and scheduled tribes welfare department, says: "No comments."

For its part, the state government purports to have announced a "comprehensive" rehabilitation package to support the oustees. However, it has failed to fully comply with the sc order on this front as well. The sub-panel has declared that companies would be required to spend five per cent of the net annual profit earned in each project on development activities such as healthcare, education, communication, irrigation and agriculture within a radius of 50 kilometres of the affected area.

The sc had ruled that when states give out land in scheduled areas, at least 20 per cent of net profits should be set aside as a permanent fund for the development of local tribals. And this allocation did not include the expenditure for reforestation and maintenance of ecology. "Orissa is legally bound to follow the stipulation. It is also consistent with the Constitution and directive principles of state policy," stresses Dhavan.

Pragada is sceptical: "The state government appears to be in a hurry to evict local people and sell the land for mineral extraction. A step that would be blatantly anti-tribal."