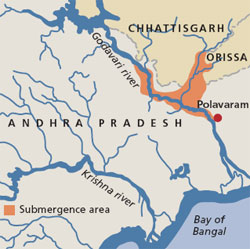 THE Orissa government has moved the Supreme Court seeking stay on the forest clearance granted to a multipurpose project in neighbouring Andhra Pradesh. It is being constructed by the Andhra government on the Godavari at Polavaram. Orissa fears the dam that is part of the project will submerge parts of the state and displace people.

The Ministry of Environment and Forests had approved diversion of 3,731 hectares (ha) of forestland on July 28 for the Polavaram Indira Sagar project despite protests. In 2005, Orissa had filed a case in the Supreme Court seeking stay on the environmental clearance granted to the dam. It also filed applications against the interim forest approval given to the project in 2008 and the clearance the Centre Water Commission gave in 2009. The applications are pending in the apex court.

In its latest application, submitted on September 4, Orissa argued that the conditions stipulated in the final approval letter were similar to the ones issued for grant of interim approval. When the approval was still pending in court, the final nod on the same conditions would amount to overreaching the Supreme Court’s authority. The state asked the court to maintain the status quo on the project claiming the final approval “is a direct interference in the proceedings pending in the court.”

The application said the environment ministry “deliberately” did not file the replies to delay the matter and went ahead with the final approval without intimating the Orissa government. As per estimates, thousands of hectares, including many villages in Orissa’s Malkangiri district will be flooded, if the project is implemented (see ‘Polavaram project in legal wrangle’, Down To Earth, January 31, 2008).

Orissa claimed the project threatens submergence and will have adverse environmental impacts. On August 5, the state’s chief minister, Naveen Patnaik, had written to Prime Minister Manmohan Singh and minister for environment and forests Jairam Ramesh to withdraw the project’s final clearance. In response, the ministry said the approval was given after taking due care of the issues, and said protection against submergence would be ensured.