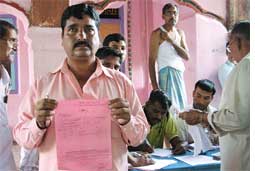 Villagers vote on Mumbai SEZ in a historic referendum

on september 21, amid tight police security, 22 villages in Pen taluka of Maharashtra's Raigad district took part in a referendum on Mumbai special economic zone (sez). Initial reports suggested the majority voted against the sez. But there are fears about the referendum's legal standing.

The state government initiated the process in August to find out whether farmers were ready to part with their land for the Rs 40,000 crore sez. Official statistics say 6,151 farmers (about 75 per cent of the total farmers) owning over 3,000 hectares (ha) in these 22 villages voted. Some were keen to sell their land provided better land price was offered.

The government decided to hold the referendum, the country's first on an industrial project, following protests and hunger strikes (see 'Roll back sez', Down To Earth, July 15, 2008). Anti- sez activists are happy with the initial results. "Our statistics indicated that over 85 per cent people voted against the sez. The government has to exclude these villages from the proposed sez," said Surekha Dalvi of Shramik Kranti Sanghatana, a local anti- sez group.

Reports also said that the state government was planning to declare the area of 22 villages as 'green zone' if the verdict went against the sez.


This Down To Earth (dte) correspondent visited Vashi, Vadhav and Kaleshri villages on the voting day. The mood ranged from excitement to fear of the pro- sez lobby hijacking the referendum, to anger. According to Ashok Madwi, a local leader in Vashi, "I am confident that in our village 100 per cent villagers (1,687 land owners) will vote against the sez. To ensure that the government does not tamper with our ballot, we have printed our own forms and are keeping a copy signed by the tehsildar as proof." Another Vashi resident said that perhaps just 1 per cent farmers would vote for the sez.

Unhappy with the compensation offered by the company, Mumbai sez P vt Ltd, in which Reliance Industries Ltd is a major stakeholder, Madwi said, "The company is offering Rs 10 lakh per acre (.4 ha) as compensation. It has calculated that if we keep this money as fixed deposit, we will earn Rs 80,000 per annum as interest alone. It claims that we need not work for the rest of our lives. If that is the case then why doesn't Ambani put all his money in fixed deposit and live off the interest?" In Kaleshri, villagers had banned entry of media fearing 'misreporting'. A village elder admitted that villagers were suspicious of all outsiders. "This is our last chance to throw out the sez," said 70-year-old M N Thakur.

The village had pro- sez groups too. "This is a joke. A ballot should always be secret but here the voting forms were distributed a day in advance and some people forced farmers to vote against the sez," said D M Mhatra a Kaleshri resident. "We are not supporting the sez blindly. We want Rs 1 crore per acre as compensation and 12. 5 per cent of our acquired land should be returned to us as developed land free of cost within two years," he added hinting that many of them were open to negotiations.

When the dte correspondent tried to speak to more pro- sez farmers, a group of village youth attacked her and verbally abused her, forcing her to leave the village. Police forces were hardly a deterrent for the youth who claimed it was a matter of life and death for them.


Mumbai sez Pvt Ltd had filed a petition in the Bombay High Court on September 18 for scrapping the referendum. The company claimed it had invested Rs 573 crore in the project. Reliance claimed it had deposited Rs 110 crore as interim compensation for land acquisition and rehabilitation. It termed the referendum illegal. B G Kolse Patil, retired justice of the high court, who is supporting the farmers' cause, agreed that the referendum was neither part of sez Act 2005, nor did it have the Centre's approval. "But it is an important exercise and it is about time that the government legalized such referendum," he said. He feared the referendum might be dismissed on legal grounds. But activists are optimistic. "There is also no ban on a referendum. It is part of the democratic process. If Reliance does not withdraw its petition, we will fight it out in the court," says Dalvi of the anti- sez group.