An American company appropriates the name 'basmati' as its own, and the contentious issue of patents and protection comes to the fore once again 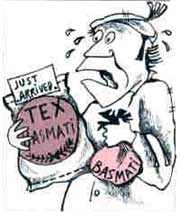 NORTH American wine merchants may sell liquor which tastes and smells exactly like champagne. But they can be hauled up in court for using that brand name, as only the French can market this sparkling concoction.

Going by that count, the name 'basmati', alluding to the long- grained, fragrant rice typical to the subcontinent, has no business to be hijacked. But it has been - by a US-based company called Rice Tech, which sells the artfully christened 'TexBasmati' rice in the US, Kuwait, Saudi Arabia and till very recently, the UK: all potential markets for India and Pakistan.

The existing intellectual property regime under the World Trade Organization (WTO) acknowledges the claim of a region over products that are associated in a "special and specific" way only with that region. The Trade Related intellectual Property Rights chapter of the WTO, in a clause named 'geographical indication', offers proprietary rights to a specific geographical area over the products associated with it.

The clause has been used effectively by European nations in the past to preserve their monopoly over speciality products. But Indians have started scrambling to protect their turf only recently. "We grow and market a number of speciality products like the 'Dasheri' mango and Darjeeling tea, and it is absolutely imperative for us to keep a strict vigil," says Suman Sahai, academician and social activist. "Basmati rice is as exclusively associated with India and Pakistan as champagne and Bordeaux wines are with France. So they should jointly file a case in the WTO dispute settlement court, and demand that the US be banned from using the word 'basmati' while selling its rice," she adds.

The initiative in this regard should have been taken by government agencies like the Agriculture and Processed Food Products Export Development Authority (APEDA) - whose primary task is to safeguard exporters' interests - which insists that it has not been caught napping. "The issue has already been dealt with and some measures, albeit temporary, have been taken," declares J S Raju, APEDA director. The APEDA in collaboration with the All India Rice Exporter's Association (AIREA) had issued a litigation against Rice Tech at the London National Economic Court. And earlier this year, they entered into an out-of-court settlement with the company, which bans the latter from exporting TexBasmati to the UK for the next three years.

However, AIREA chief Anil Adlakha later clarified that the move - of taking the usurpers to court - was first taken by an Indian exporting concern, United Riceland. But realising that it could not win the battle by itself, United Riceland approached the government and the AIREA for support which was promptly granted.

Some questions remain unanswered. Rice Tech has been carrying on its trade in basmati since the late '70s. But the issue is being looked into with a degree of concern only now. M S Swaminathan, the eminent agricultural scientist, can find a reason behind this slackness: "The largest export of basmati rice is from Pakistan. We have started catching up only recently. In the last 10 years, several private companies including the Thapars have entered the field and improved the delivery system in a manner that suits foreign consumers."

The government, too, is now building up its arsenal. "Now that the exporters have approached us, we are consulting international legal experts to help them," says a spokesperson of the Union commerce ministry. She feels that the problem would not have brewed up at all if exporters had followed the certification route, which would have certified their commodity (basmati, in this case) in the countries they export to, so that contenders could not infringe on their rights. However, economists like Avijit Sen of New Delhi's Jawaharlal Nehru University is sceptical about this strategy. "It is a viable option but should not be the only one, because the certification law may or may not be effectively implemented in all the countries. In the Middle East, for example, it might not act as a barrier at all," he contends.

So how would our exporters ward off rivals in the affluent Arab nations who are bulk buyers of basmati? And more importantly, can this issue be dealt with once and for all on a permanent basis? "We are chalking out the strategy for a more permanent solution," assures Raju. And that centres around the much-awaited plant varieties protection act. This legislation - in place in most Northern nations - would offer patent protection in other countries to Indian basmati growers. It would also ensure that if the materials developed by them are exploited commercially, a share of the profits would flow back to them. "The TexBasmati imbroglio only underlines the urgency of our Parliament enacting the act. There is no point in our complaining and not doing anything to protect our work," is - the verdict given by Swaminathan.

There are other avenues open before Indians. They can launch their offensives by brandishing the Convention on Biological Diversity (CBD), to which India is a signatory. "The CBD endows nation states sovereign rights over their genetic resources, and forbids any other party from accessing them without the 'prior informed consent' of the country of origin. So we can hold the North American growers, who are developing products from basmati germplasm, guilty of stealing our property," declares Sahai. But the moot question is who will explore these avenues and when.