Out of all jambs

Don't curse yourself if you get your finger stuck in the door jamb... just thank Steve Webb 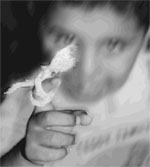 it has happened to all of us: getting a finger or two trapped between a door and the door jamb. For most, it means a few moments of intense pain. Then, the incident slips out of our mind until, at some other time and some other place, it happens again. Believed to be the most frequent of the numerous household misadventures, this apparently-minor accident has some scary truths behind it.

In uk, for instance, as many as six people have parts of their fingers amputated every day after going through such accidents. Most of the victims are children.

Now, a recent invention from a British inventor promises significant reduction in such mishaps. Product designer Steve Webb has developed an unobtrusive plastic strip that seals off the gaps between doors and jambs in houses so that even the most determined child cannot poke a finger into the hole.

Webb began working on the device three years ago after his daughter Emma, then 18 months of age, trapped her fingers twice within the same fortnight. "It was a horrific trauma the first time, but when she did it again, I was livid," Webb says.

Failing to find any ready-made solutions, he tackled the problem himself. He says that every year the Royal Society for the Prevention of Accidents, uk , receives more than 30,000 reports of people trapping their fingers in doors.

Webb's device, called the "Finger Protector", is manufactured by his company of the same name. The company's headquarters are at Upminster in Essex, uk . The Finger Protector consists of extruded plastic strips made from grades of polyvinyl chloride safe enough for routine use in the food industry.

The strip operates like the spine of a long, slender folder, fanning out when "open" to block the entire length of the gully created by the hinge when the door is ajar. It bends in two along a prefabricated crease to close unobtrusively when the door shuts. One side of the strip is fixed to the door by a self-sealing adhesive strip. This acts as an anchor, keeping the entire unit steady whether the door is open or closed.

The other side of the strip has a t -shaped ridge that slides into a channel stuck to the door jamb. This allows the door to move vertically -- some doors are designed to lift slightly when opened.

"The protectors completely cover the hinge cavity," says Webb. He claims that the device can be installed in less than five minutes. "There are no tools, hammers, screws or nails needed, and it can be fitted even by an idiot," he says. "We once fitted one in 16 seconds," he adds ( New Scientist , Vol 158, No 2132).

Since its launch in Britain, Webb has sold thousands of units and is now looking for fresh finance to expand production.

Already restaurants, nurseries, swimming baths and nursing homes have installed Webb's Protectors to avoid the little ones from getting their fingers hurt.

Webb says that once his finger protectors have done their job, they can be easily dismantled and removed without any damage to the door or the frame.

Overjoyed by the success his Finger Protector is enjoying at home, Webb is now busy planning to save those fingers worldwide.