Migrants and tribals deprived of rations; public tribunal steps in 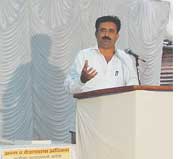 After  authorities failed to act on complaints regarding pilferage of food rations supplied through the public distribution system (pds), non-profits and activists of Mumbai organized a public hearing to register grievances.

Over 800 poor and tribal people living in Mumbai and adjoining Thane city gathered at Ambedkar Bhavan in Dadar area to take part in the public hearing on March 14.

Hawkers, slum dwellers and tribal people deposed before a public tribunal headed by retired Bombay High Court judge, H Suresh. The interim report of the tribunal said the current system of providing ration cards only to those people with address proof deprives the poor migrant population of food grains.

It urged the government to address the problem on priority. The report also recommended public vigilance committees of local people to ensure proper functioning of pds outlets. The report is to be submitted to the secretary of food and civil supplies department.

“Time and again we have informed the government about pilferages in pds, but to no avail,” said Reshma Jagtap of Indian Centre for Human Rights and Law, one of the non-profits that organized the event. Jagtap’s colleague Laxminarayan Dasari said primitive tribes of Maharashtra such as the Kathkaris are the worst-affected though they are entitled to free food grains under the Antodaya Anna Yojana. Indavi Tulpule, representative of Shramik Mukti Sangathan, a trade union of tribal farm workers of Thane, said malnutrition among tribals is high.

A few persons complained their requests for ration cards were rejected.