Over 200 stalls of crackers gutted in Faridabad fire 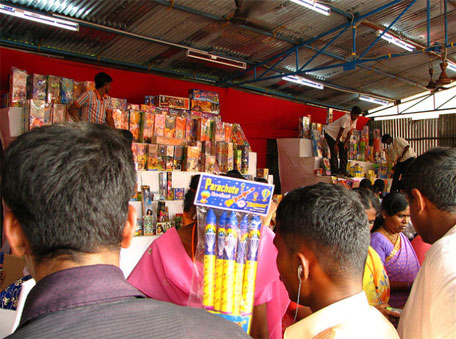 As many as 200 shops selling firecrackers in Haryana’s Faridabad were gutted in a fire on Tuesday evening. The shops were located around Dussehra Ground, one of the authorised places in the state for selling of fire crackers. This is also the biggest firecracker market in the area.

Nearly 18 fire tenders were rushed to the spot in the National Capital Region (NCR). According to news reports, although no casualties were reported, a few people were said to be missing. A few ambulances were waiting on stand-by. TV reports also suggested that the police were suspecting a short circuit to be the cause of fire.

Another fire in a firecracker factory in the Kakinada district of Andhra Pradesh on Monday had killed 17 and injured many more. The government has decided to give a compensation of Rs 2 lakh to the family of each of the victims and medical treatment is being provided to the survivors.

A serious health hazard
Crackers not only increase the risk of fire accidents but are also a regular health hazard. According to a study published in Indian Journal of Plastic Surgery in 2012, there was a massive increase in the number of firecracker-related injuries in the NCR region from the year 2002 to 2010. This was based on hospital statistics at Safdarjung Hospital. The researchers concluded that in spite of legislations and court orders, the number of patients is on the rise, suggesting flaws in implementation.