Over 300 million Indians still defecate in the open: WHO-UNICEF report

Bangladesh, Nepal and Pakistan do much better in improving access to sanitation

One-third of the world’s population, about 2.4 billion people, will remain without access to improved sanitation in 2015, according to a report recently published  jointly by the World Health Organisation (WHO) and the United Nations International Children’s Education Fund (UNICEF). The report says that three south Asian countries, including Bangladesh, Pakistan and Nepal have shown significant improvement in the past 20 years. In India, however, more than the quarter of the population still practices open defecation.

The report, titled Progress on sanitation and drinking-water 2013 update, warns that at the current rate of progress, the 2015 Millennium Development Goal (MDG) target of halving the proportion of people without sanitation compared to 1990 will be missed by 8 per cent – or half a billion people. The report, which is based on data collected in 2011 with updated information, was published on May 13.

While three countries of South Asia – Pakistan, Bangladesh and Nepal – have been deemed good performers, India has less than 50 per cent of its people using improved sanitation (see figure 1). 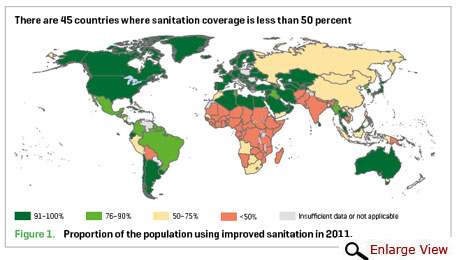 According to a region-wide assessment, eastern Asia has performed better than any other region in the world. The report says, “Greatest progress has been made in eastern Asia, where sanitation coverage has increased from 27 per cent in 1990 to 67 per cent in 2011. This amounts to more than 626 million people gaining access to improved sanitation facilities over a 21-year period.” (see figure 2) 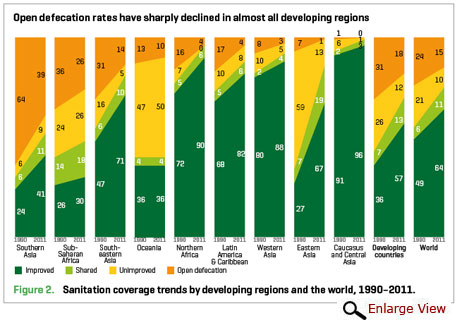 “There is an urgent need to ensure all the necessary pieces are in place – political commitment, funding, leadership – so the world can accelerate progress and reach the Millennium Development Goal sanitation target,” says Maria Neira, WHO Director for Public Health and Environment. “The world can turn around and transform the lives of millions who still do not have access to basic sanitation. The rewards would be immense for health, ending poverty at its source, and well-being,” she adds.

The report echoes the urgent call to action by United Nations deputy secretary-general Jan Eliasson for the world community to combine efforts and end open defecation by 2025. With less than three years to go to reach the MDG deadline, WHO and UNICEF have called for a final push to meet the sanitation target.

"This is an emergency no less horrifying than a massive earthquake or tsunami," says Sanjay Wijesekera, global head of UNICEF's Water, Sanitation and Hygiene (WASH) programme. “Every day hundreds of children are dying; every day thousands of parents mourn their sons and daughters. We can and must act in the face of this colossal daily human tragedy.”

Open defecation due to lack of access to sanitation poses a hazard to public health. Exposure to human excreta or its contamination of drinking water sources, causes a host of illnesses such as cholera, dysentery,  typhoid, polio and infections with E coli and tapeworm. Such exposure can even cause epidemics.