Over the line humour 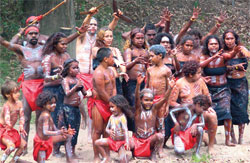 “How do you kill 1,000 flies at once? Slap me in the face.” It is just one of many examples of the racist pictures of Aboriginal people posted on a Facebook page, Aboriginal Memes. The page, which Facebook took down after protests, pressure from Australian officials, and an online petition, featured photos of the Aborigines with captions depicting them as drunks, addicts and welfare abusers. The page also allowed users to post jokes about them.

At first, Facebook refused to remove the page, saying it did not violate the network’s Statement of Rights and Responsibilities. According to SBS, an Australian broadcasting network, the page drew the ire of many Australians, including communications minister Stephen Conroy who said, “We don’t want to live by the same standards that Facebook does.” A petition calling for the removal of the page on change.org gathered 17,000 signatures in two days. The authorities have launched a probe into the page, reportedly created by a 16-year-old boy in Perth.