The survival and evolution of a species is dependant on both the competing claimsfor survival being asserted within the species and between different species. Timothy Flannery in his book The Future Eaters, explores the strategies backing evolution by studying certain human migratory patterns 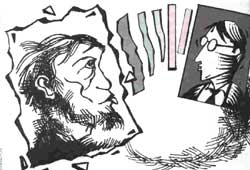 FLANNERY'S prime supposition is that as and when competition with other carnivores and primates increased, hominids turned to new habitats. Such rivalry between different species and the consequent migrations resulting from the same constituted the main driving force of evolution (Natural History, Vol 104, No 12).

Fighting it out for the same resources ultimately limited the distribution and numbers of competitors in the world. In a highly coevolved ecosystem, each species strived to out-do its predators by changing its survival strategies. As and when one species adopted fresh tactics, others quickly followed suit and this process of change carried on in an unending manner over time.

But once the species was released from the burden of struggling for its survival, depending on the sustainability of the conditions, the particular species at first proliferated. When resources get depleted, their numbers decimated considerably resulting in a restoration of the balance being maintained within the ecosystem.

Flannery wonders if it was a similar situation which led to the dispersion of early humans. Biologist Jared Diamond proposed that early humans took a great leap forward around 40,000 years ago when humans started making more elaborate tools and traded widely, when art was created, humans increased in numbers and various belief systems emerged. These pointers have been substantiated by the manner in which Afro-Eurasian humans have evolved. As a group who had primarily been hunters and gatherers for millions of years, once they improved their skills, their Prey also acquired new defence tactics.

For millions of years, these hominids had looked across the Lombok strait separating the Asian island of Bali from the uninhabited Lombok island of Australia. Around 40- 60 thousand years ago this great divide was crossed and humans made their way in to the land which had not known any like them before.

The Lombok strait is referred to as Wallace's line because it divides Asian animal species from the Australasian ones. In and around 1his new land thrived virgin resources of a great number of crabs, molluscs and a variety of fish. There were also animal species such as pygmy elephants, birds, bats and rats which had never known a human predator before. Their vulnerability and naive nature gave the human population there an upper edge because for a long time they never went without a successful hunt. They were all-powerful beings in this land of plenty and their population flourished as never before.

The carrying capacity of Bali and Java was limited and the competition with other carnivores kept a check on the human population. But this was not the case in Lombok because as the last pygmy elephant, the only large herbivore, satiated human appetite, the untouched vegetation on the mountain slopes became their next victim. The erosion which followed led to the buildup of soil in the neighbouring lagoons and swamps, which resulted in a collapse of marine life, but also created fertile coastal plains. Humans here now started depending on plant resources.

Plants had crossed Wallace's line much before and varieties of yam, wild bananas, taro and sugarcane had already established themselves here. Survival instincts forced man to quickly develop and hone his agricultural skills. This perhaps gave rise to competition between groups of humans leading to the development of a social structure within communities, which "enhanced their ability to process and distribute food rather than defending their own or snatch resources from others". This may have motivated them to develop some ingenious technologies to gain access to ,as-yet-untapped resources'.

A similar string of events continued over a period of thousands of years as humans moved from one island to another in Australasia where the archipelago stretches about 4,800 km to the east and as far as Tasmania and the Solomon islands in the south. Their migrations over time fine-tuned their navigational and ship-building skills.

Flannery concludes with the suggestion that if this great leap did not take place in the Southeast Asian islands, it must have occurred in the Afro-Eurasian homeland of the early hominids some 40,000 years ago where the build- up and exchange of knowledge took place. "Groups that possessed such knowledge would certainly have been able to increase their population and thus gain a competitive advantage," he declares. We cannot afford a similar leap today as it would lead to the elimination of entire biotas.