ALL fish are not equal in commercial value. Species like tuna and perch carry high value and are targeted by fishers while smaller fish are discarded. This discard, or bycatch, is gaining importance. A study from Tamil Nadu coast shows the bycatch market has grown so much in the past decade that some fishers have begun to target bycatch species. Though this minimises wastage, it could lead to depletion of small fish along with the commercially important ones.

Researchers from the Cambridge University in the UK and Nature Conservation Foundation, a research outfit in Mysore, interviewed 26 trawler owners to understand the trend. Interviews, though biased by imperfect recollections, anchored the study because no data on bycatch is available in India; at fish landing centres only the amount of target species caught is noted. The researchers calculated the catch, income and costs per trip over a 30 year span. 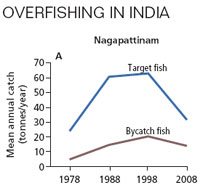 The target fish catch increased steadily in the first two decades starting 1978 and then declined rapidly. This, the researchers concluded, was due to overfishing—the decline occurred in spite of the increased efficiency of trawlers. The bycatch, though, kept increasing (see graph). The target fish were profitable in the first two decades but as cost of trawling quadrupled, incomes dipped to near zero from 1998 onwards. It was the income from the bycatch that kept the trawlers afloat.

Without consideration of its ecosystem- wide effects, bycatch-supported prolonging of trawl fishing will lead to an ecological catastrophe for nearshore marine populations as well as the permanent loss of livelihood for fishers, the researchers said in the August issue of Conservation Letters. V Vivekanandan of non-profit South Indian Federation of Fishermen Societies in Thiruvananthapuram said the bycatch problem has been aggravated by the increased scale of trawling. Trawler numbers have increased eight times between 1961 and 1998 in southeast India.