CITES proceeds cautiously, in the wake of the Convention on Biological Diversity 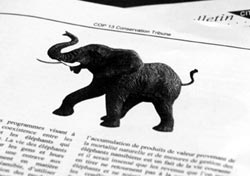 The Convention on International Trade in Endangered Species (cites) took a few steps forward and retracted a whole mile at its 13 th Conference of Parties (co p-13), which concluded in Bangkok on October 14 after 2 weeks of hectic parleys. It set in motion, or sped up, processes to overhaul the very extent of the convention's reach. In the same vein, it passed proposals and accepted documents that sent it reeling back to the days of ultra-conservation (see box: What moved at CoP-13).

Thailand's Prime Minister Thaksin Shinawatra got the ball rolling in a positive direction, committing to help set up an asean-wide system to monitor trafficking and promising to host a meeting to this effect in 2005. cites secretary-general W Wijnstekers had other urgencies in mind: the convention faced a fund crunch.Even as existing programmes lacked resources, he told delegates and the media, ever-enthusiastic conservation-oriented countries were eager cites played a bigger role in wildlife protection in the years to come.

Money crunch apart, cites has been facing an increasing crisis of identity: the Convention on Biological Diversity (cbd), for instance, has now taken the lead in setting the terms for sustainable trade in natural resources. In the last decade, the convention has attempted to re-cast itself, trying hard to find synergies between itself and other international bodies like the International Whaling Commission and the Food and Agriculture Organisation (fao), and multilateral agreements such as the Convention on Migratory Species and cbd. In fact, cites has already concluded memoranda of understanding with the Basel Convention, the Montreal Protocol, iucn, the World Customs Organization and Interpol, and is preparing one with unep and fao(see box: CBD and CITES).
cites rose out of concern in the 1970s that international trade in wildlife was driving numerous species to extinction; thus, strong controls on such trade -- also illegal -- were required. Nearly 20 years later, cbd was created to address the use of, and threats to biodiversity; it includes development as well as conservation concerns: a specific objective is "the fair and equitable sharing of benefits arising out of the utilisation of genetic resources" and related provisions regarding access to genetic resources.

Studies of the relationships between the two conventions make it amply clear that their overall goals are not really identical, formulated as they are in different eras of political awareness as well as political correctness. But in 2004, cop-7 of the cbd established specific goals and sub-targets on wild flora and fauna with international trade, expressly desiring to work in tandem with cites. So it was that at cop-13, Namibia's submission bringing cites and cbd closer and focussing on the Addis Ababa Principles and Guidelines on sustainable use -- adopted at cbdcop-7 -- was adopted.
For all practical purposes, cites has traditionally been a bastion of conservationists, not the hunting grounds of groups supporting rational sustainable use. It was only in the last cop that discussions began on adopting the language -- and more evolved stance -- cbd has on sustainable harvest and utilisation of natural resources. But countries like the usare opposed to cites aligning itself further with cbd. Sources in the us government reveal that the us delegation went to cop-13 determined to stall progress on this count. Critics believe the us and other economically influential countries find it easier to influence votes in a cites that is isolated from other multilateral agreements, and often held ransom by us-based conservation ngos. Also, size matters. At co p-13, the us brought in more than four dozen officers to bamboozle its way through negotiation. The ngo lobby, too, was filled with well-funded us groups. Eugene Lapointe, head of Geneva-based iwmc World Conservation Trust, accuses us ngos of strong-arm tactics: "Congressional hearings that helped establish us negotiating positions at cop-13 were dominated by protectionist ngos. us officials were, as always, under constant pressure."

A consequence of such skewed political clout has been that even as the convention has tried hard to develop more scientific criteria to evaluate proposals for listing of animals on its appendices (which restrict or ban international trade in species), the real decisions have been very often taken on whims and desires of the lobbies that be. A case in point this time was Thailand's proposal to transfer the Irrawaddy dolphin -- popular in water parks as a show animal -- to Appendix i (species listed here cannot be traded in).

cites has spent years in revising its listing criteria. And fao has spent over us$1 million in contributing to the process. On the fifth day of cop-13 , to general acclaim, the outcome of this process was accepted by consensus, with an agreement not to immediately entertain changes in the criteria and so give it time to work.

But cites failed the very first test of the new criteria, the very next day. Thailand's proposal was being debated. Norway drew attention to the convention secretariat's evaluation that the proposal did not meet cites criteria. No one challenged the statement, including Thailand, whose final summary indicated the desire to list this species was 'to draw attention to it' and 'to assist in raising funds'. The proposal was adopted. Critics claim it is such irrational decisions that make the faoviewcites' possible involvement in fisheries management issues timorously.

Things got only worse when it came to debating the contentious African ivory case. Conservationists gained the biggest victory: an unprecedented continent-wide action plan was adopted to crack down on unregulated domestic ivory markets in Africa. The plan commits all African countries with domestic ivory markets to either strictly control the trade or shut it down altogether. This, when Namibia along with Botswana and South Africa, won support for a one-off sale of existing ivory stocks, only the second since an international ivory trading ban was introduced 15 years ago.

Things got convoluted when Namibia was allowed to begin 'non-commercial' trade in carved-ivory ekipas, permitting two ethnic minority communities -- the Owambo and Ovi-himba -- to resume carving these amulets collectors of African traditional jewellery covet. The vote allows ekipas to be exported from Namibia by visitors as personal effects, but not for resale. Even this 'concession' came through in Namibia's favour primarily because the 25 European Union (eu) countries -- each with a vote --abstained. Ginette Hemley, vice president for species conservation at wwf,claimed: "The trade will be strictly non-commercial and on such a small scale that every piece of ivory will be individually marked and tracked." But several parties laughed at such claims and the term 'non-commercial sale', knowing the wording would only push the legitimised business to become illegal.

In contrast, host nation Thailand's proposal to lift control on artificially bred orchid hybrids was approved. The kingdom wanted such flowers removed from cites appendices, sparking heated debate among eu delegates and wildlife protection groups. The issue was: how could artificially propagated hybrids be differentiated from wild ones? A revised proposal was finally adopted, after Thailand agreed to maintain strict trade control on eight endangered orchid genera. "This facilitates orchid trading because export and import can be conducted without seeking cites approval," said Surakrai Sangkhasuphan, a plant specialist at Thailand's department of agriculture. Major importers of Thai orchids include the us, Japan, and eu countries.

Decisions favouring conservation through breeding and ex-situ cultivation moved in the right direction, but a proposal that could have really stretched cites' mandate further was spurned. eu proposed to include a paragraph -- in the interpretation section of the appendices -- which would have exempted from the convention's provisions the following: in vitro cultivated dna that does not contain any part of the original from which it was derived; cells or cell lines cultivated in vitro; urine and faeces; medicines and other pharmaceutical products; and fossils. eu finally had to withdraw the proposal. Switzerland, too, withdrew a similar proposal. Such proposals were stalled, observers noted, because of reluctance from many countries like India, a clear indication that discussion on this issue -- which involves the trade interests of pharmaceutical companies and other natural resource extract-based industries -- would become more explicit once the cbd resolved it. Will that happen by the time cop-14 is held in the Netherlands, two years from now, remains to be seen.