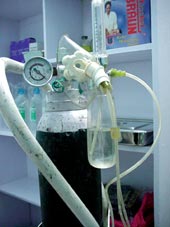 Oxygen is not just for breathing. Researchers in the us say it heals wounds too. They have found that exposing wounds to pure oxygen cures them more quickly and applying bags of pure oxygen on the skin can even prove effective against severe abrasions. Patients with a wide range of disorders -- from bedsores to ulcers -- are expected to benefit from the research.

Scientists at Ohio State University based their findings on a study of 30 patients who had at least one lesion, ranging from post-surgical wounds to injuries resulting from ulcers. A bag of pure oxygen was placed over the injuries for 90 minutes a day for four days, followed by a three-day rest period. This cycle was repeated for as long as was necessary for the wound to begin healing. Three out of four wounds healed properly using the oxygen bags.

Wounds resulting from surgery had the best success rates. These were followed by ulcers on the hands and legs. But bedsores were the least likely to clear up completely, researchers found, with a success rate of 44 per cent.