A recent report says the intensity of ultraviolet radiation striking an Argentine town has risen, confirming fears about ozone depletion 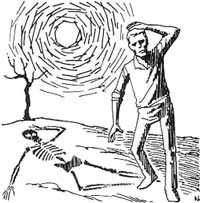 SCIENTISTS have confirmed environmentalists' fears about the depletion of the ozone layer, by measuring a 50 per cent increase in the ultraviolet radiation striking Ushuaia in south Argentina.

According to a report recently published in the Journal of Geophysical Research, the increase occurred in December 1990 when a piece of the seasonal Antarctic ozone hole broke away from its main polar location and drifted north. It is assumed the hole has afterwards dissipated.

The measurement is considered significant because though the debate over the ozone hole has been raging for some time, scientists had not been able to confirm it. "These are the first measurements to show a large increase in ultraviolet radiation over a populated area," said John Frederick, a University of Chicago atmospheric physicist.

The increase in the radiation, according to scientists, brought the level up to the intensity that normally occurs 20 degrees closer to the equator.

The Ushuaia incident is known to have been caused by humans as the annual ozone hole is caused by cholorofluorocarbons (CFCs), which are all synthetic. Unlike chlorine in seawater and from volcanoes, CFCs travel to the stratosphere, where the ozone layer in the stratophere.