Two major volcanic eruptions have further damaged the CFC-affected ozone layer, creating a larger than ever gap in the stratosphere. 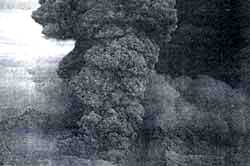 DURING the 1992 September-October southern spring, the world's ozone layer dropped to the lowest levels recorded in 35 years. According to the World Meteorological Organisation (WMO), the ozone levels over northern Europe, Russia and Canada last winter and spring were 12 per cent below the seasonal average. The Antarctic ozone hole, too, opened earlier than its usual time and grew to a larger size than before, said experts at the US National Aeronautics and Space Administration. US satellite Nimbus reported that on September 23, the Antarctic hole in the ozone layer measured 8.9 million sq miles across -- 15 per cent higher than in 1991 and nearly as large as the entire North American continent.

Normally, the affected ozone patch in the stratosphere falls between 13 and 24 km above the earth's surface. This year, almost 50 per cent of the ozone above and below this belt was also destroyed. WMO also reported high destruction levels over the South Pole and the populated areas in southern Argentina and Chile. People underneath the hole were subjected to nearly 50 per cent less protection from UBV, ultraviolet light emanating from the sun.

The increased destruction is believed to be a combined result of polluting discharges from two volcanic eruptions in 1991 -- Mt Pinatubo in the Philippines and Mt Unzen in Japan -- and the build-up of human-made chlorofluorocarbons (CFCs). Large quantities of sulphur were injected into the stratosphere when the volcanoes erupted and the subsequent formation of sulphate aerosol particles generated disturbances in the atmosphere that could affect the earth's climate. Scientists believe the eruptions could have had a double impact. The solar and infra red radiation caused by the eruption is likely to produce a cooling of the troposphere -- the atmosphere close to the ground -- and a simultaneous warming of the lower stratosphere. Additionally, diverse chemical reactions on the surface of sulphate aerosol particles make the ozone molecules more vulnerable to atmospheric chlorine and therefore, to CFCs.

Ozone depletion in the stratosphere increases the risk of skin cancer and blindness and can damage the body's immune system. It can also adversely affect crop yields and marine food chains. Alternately, lower level ozone -- at the earth's surface -- can damage human lungs.

Scientists at the US Environmental Protection Agency believe an unusual cloud of pollution -- consisting of a large pool of ozone and smog -- now at its peak in the skies above the South Atlantic Ocean, will further contribute to global warming. The core of the ozone pool is believed to be just below the Equator, stretching from the west coast of Africa over the ocean, with a diameter of more than 3,200 km. The 180-member scientific team from 13 nations studying the smog claimed "it is caused by fires ranging across fields and grasslands of Brazil and the Savannas of southern Africa".