Ozone loss has a silver lining 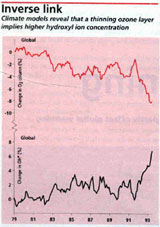 THE ozone layer protects the earth's surface from the harmful effects of the sun's ultraviolet (UV) radiation. Ozone depletion would therefore imply an increase in UV radiation which, scientists fear, could lead to an increase in skin cancer and cataracts, and perhaps adversely affect agricultural systems. But now climatologists point out that an increase in UV rays could have some benefits: radiation reaching the lower atmosphere could reduce the effect of global warming (Nature, Vol 372, No 6504).

Two recent studies have shown that ozone depletion could lead to enhanced cloud cover, which bounces off sunlight before it hits the earth. It also lowers the atmospheric concentration of greenhouse gases, carbon monoxide and methane.

In the first study, Ralf Toumi of London's Imperial College, and Slimane Bekki and Kathy S Law at the Centre for Atmospheric Sciences at the UK's University of Cambridge, have found that the thinning of the ozone layer allows deeper atmospheric penetration of UV radiation. These radiations, particularly UV-B rays, penetrate into the lower atmosphere, or troposphere, and disintegrate the ozone molecules there. In the presence of tropospheric water vapour, the oxygen atoms from dissociated ozone lead to the formation of copious amounts of hydroxyl ions (water molecule minus one hydrogen atom).

These ions are responsible for breaking down sulphur dioxide to sulphate ions, which form cloud condensation nuclei. So, the higher the concentration of these ions, the more expansive is the sulphate cloud cover.

Climatologists contend that an increase in UV radiation could enhance cloud formation which could counter the warming-effect due to increasing atmospheric levels of greenhouse gases.

Further, studies have shown that hydroxyl formation in the troposphere is sensitive to the thickness of the ozone layer. Therefore, the marked reductions in global ozone that have been observed through the '80s, and particularly in the early '90s, are likely to have led to the birth of more hydroxyl ions. Scientists calculate that hydroxyl concentrations could have indeed increased by about 3 per cent due to a decrease in ozone levels.

In another study, Bekki, Law and another colleague J A Pyle, report that their climate modelling exercises reveal that the unprecedented decrease in stratospheric ozone in 1991 and 1992 may have contributed to a sharp decrease in the growth rates of both methane and carbon monoxide (Nature, Vol 371, No 6498). The 2 gases have a high potential for global warming.

The study cites surface measurements from global networks which have revealed a decline in the rate of the increase of methane -- from 17-20 parts per billion by volume (PPBV) per year at the beginning of the '80s to 12-14 PPBV per year during 1988-90. Unexpectedly, a large reduction in the methane growth rate was reported for 1992. Between 1981 and 1986, global carbon monoxide measurements indicated an increasing trend, but this was followed by a decrease between 1987 and 1992. Most recently, global measurements made from 1990 to 1993 showed a more pronounced decrease in carbon monoxide.

The scientists contend that the increased hydroxyl ion concentration alluded to earlier is responsible for the decline in growth rates for these 2 greenhouse gases. Hydroxyl ions are the main atmospheric sink for both methane and carbon monoxide.

Scientists believe that their results may have important implications. If, as expected from the international agreements on chlorofluorocarbons (CFCs) -- the chemicals primarily responsible for ozone depletion -- stratospheric ozone levels revert to pre-CFC levels, the rates of increase of greenhouse gases such as methane will rise. They add, "Interestingly, recent measurements indicate that ozone concentrations have started to recover in the Northern hemisphere in 1993. This may have translated into a return to higher growth rates of methane and carbon monoxide."