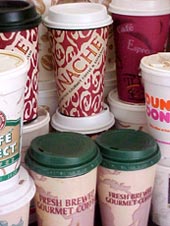 in a Munich laboratory, a group of engineers has worked through a set of chemical reactions that could sharply reduce the cost of manufacturing commonly used chemicals such as polystyrene. The development is significant, as polystyrene is a key ingredient to make a number of products including tyres, carpet backing and disposable coffee cups as well as plates.

The company running the laboratory is NanoScape, a 12-strong start-up formed in 2001 by researchers at Munich's Ludwig-Maximilians University. The company also has research connections with Fritz Haber Institute, one of Germany's leading scientific establishments. The work of NanoScape involves creating new catalysts to speed up the production of styrene -- a widely used chemical that is central to the synthesis of many substances including polystyrene. According to Gerhard Mestl, chief technology officer at NanoScape, their catalysts could halve the cost of making styrene. The total cost of styrene produced worldwide every year is us $14 billion. Just over half the world output of styrene goes into producing polystyrene.

If all works as hoped, the new catalysts could replace the iron-based catalysts now used to produce styrene from its basic ingredient, ethyl benzene. The new catalysts contain tiny, tubular carbon structures with dimensions measuring in nanometres (billionths of a metre). The dimensions of the structures in existing catalysts are 100 to 1,000 times greater. Because of the new material's fine structure, they present a large area to reacting chemicals; this has the effect of speeding up the reaction and reducing the energy required. Wayne Daniell, chief executive of NanoScape, says: "While existing processes require a temperature of 550c, our catalysts will work at just 400c." The iron-based catalysts also require a large amount of steam to do their job. This has to be continually recycled to water, and then heated up again. By cutting out the need for steam, the new catalysts promise to reduce the complexity of the reaction and thus its cost.

The year 2004 will be important for NanoScape, as the company will try to win support from the chemical industry to set up a pilot plant for styrene production using its catalysts. Among the companies that NanoScape has talked to about its idea is Mitsui, the large Japanese chemicals group. Matthias Ramm, a manager in Mitsui's European subsidiary, says NanoScape's concepts are promising, but more research is required to establish whether they will work on a commercial scale or not.