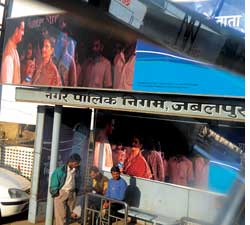 If you ride a rickshaw from the railway station to the bus terminus in Jabalpur, you can’t miss gigantic billboards showing a woman activist being offered a bottle of Kinley water at a hunger strike.

The vishwas karo (start trusting) campaign launched by Coca Cola in late 2009 is glaringly ironic. The fizzy giant that owns the Kinley brand had faced public protests in the past on charges ranging from groundwater depletion to chemical poisoning. “It would be simplistic to see the ad as capitalism incorporating protest movements,” said Janaki Srinivasan of Panjab University, who has researched on social movements. “It simply means bottled water is everywhere.”

The ad film on air has more in store.

A commando on patrol is taken aback when a window opens suddenly, only to find a hand stretching out, offering Kinley. Kinley has 10 per cent share in the over Rs 2,000-crore bottled water market in India. Take a sip when hunger strikes, it would go up for sure!