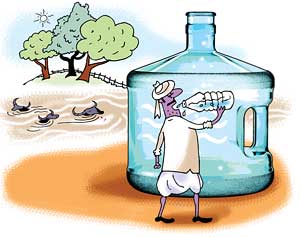 Rural water supply scheme for Andhra has no room for public opinion; price may be hiked later

villagers in Andhra Pradesh will soon get their drinking water supply in 20-litre plastic containers. The government has shortlisted five companies that would treat raw water and sell it to villagers. The government thinks this is the best way to supply safe drinking water to villages but non-profits think the scheme amounts to leasing out the state's water resources for profit to private companies.

The rationale for the project is the high incidence of water-borne diseases in rural Andhra. The state's water supply secretary Chitra Ramachandran said more than half the villagers do not get the minimum daily requirement of water--40 litres. As per data available with the rural water supply department 40,926 rural habitations (nearly 60 per cent), out of the total of 72,329 get less than 40 litres water per person a day. "Most of the state depends on contaminated drinking water leading to frequent disease outbreaks," Ramachandran said.

Officials said the scheme would benefit villagers. "In some villages private suppliers who hold monopoly are selling water at Rs 10 for a 20-litre container. The scheme will ensure safe drinking water for as little as Rs 2 for 20 litres; scheduled tribe families will get it for Re 1," said Narsing Rao, superintendent engineer of rural water supply. Each of the 1,100 mandals in the state will have a reverse osmosis (RO) plant that the selected companies will install.

Non-profits are sceptical. The panchayats, civil society groups and water experts were not consulted and the scheme was rushed through, said Jasveen Jairath of People for Water, a coalition of non-profits and individuals opposing the scheme. "The panchayats have no role apart from identifying land for the water facility and and handing it over to the contractor," she said. Jairath said the short-listed companies are mostly RO traders or manufacturers and do not have the social mobilization skills needed to ensure equitable distribution of water.


The government's water supply scheme is loosely based on the model evolved by the non-profit, Nandi Foundation. It has installed 380 treatment units across the state after signing memoranda with gram panchayats. It supplies water to 800,000 people. Its chief Manoj Kumar said the major flaw in the new scheme is that private companies are not accountable to the people. "Ideally the memorandum of understanding should have been between the company and the panchayats. That is how a decentralized model works," said Kumar.

The foundation is unsure if the private companies would continue to supply water at 10 paise per litre. Amit Jain, chief operating officer of Nandi, said the cost of installing one RO plant works out to Rs 6 lakh. If the company gets bulk water free of cost, it would be able to recover investment in three to five years. But selling water at 5 paise per litre to some communities is not feasible, Jain said. The government has not stipulated whether the rates would remain the same for the entire 10-year period of the contract which means prices could be hiked, he said.

Non-profits have also questioned the choice of technology for the scheme. Reverse osmosis generates a lot of effluent; it can be as high as 60 per cent depending on the quality of the raw water. "In the tender document, the government has made it clear that RO plants are their preferred choice without taking into account quality of water in each mandal," said Umesh Varma of People for Water.

An 11-member technical committee formed under chief engineer rural water supply, Rajeshwar Rao, had suggested RO technology only for areas where drinking water source is brackish or has high impurities. But the tenders floated in July were for RO plants only. S Nally of Unicef, who was in the committee, confirmed such a recommendation was made to the government but not followed. One of the short-listed companies, Water Health India, has also publicly voiced concern about using only RO technology.