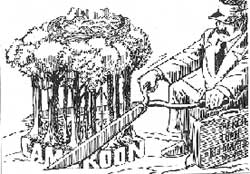 CAMEROON'S forests are being hijacked by France. The Cameroon Post, the country's leading news daily, recently reported that France had agreed to cancel half the 3 billion debt it is owed by Cameroon if French companies are allowed almost exclusive access to the African nation's rainforests. France also insists that a new law be passed to more than double the forest area available for logging by non-state companies.

Environmentalists across the globe are aghast. "This appears to be a bizarre reversal of the debt-for-nature swaps of the late '80s, under which Third World debt was cancelled for agreements to protect forests," observed Fred Pearce in the British magazine, New Scientist.

However, this time, the implications are far more alarming. French companies like the Societe Forestiere Industrielle de la Doume (SFID) - in which Jean-Christophe Mitterrand, the son of the French president, is one of the leading figures - have been logging forests in Cameroon since 1947. SFID alone exports more than 250,000 cubic metres of timber each year. This large-scale logging has reduced Cameroon's forest cover to a meagre 22 million ha - roughly half of what it was a few decades ago.

According to the Netherlands committee of the World Conservation Union, the SFID engages in "hyperselective exploitation", taking only a handful of the best trees each area. Though this is less harmful than clear-felling, it attracts migrant farmers who add to the degradation, thus totally devastating the forests.

Cameroon can hardly afford to let the SFID loose on its trees, which are reportedly being destroyed 10 times as fast as they are regenerating. However, unmindful of the risk, the government is all set to roll out the red carpet for the French.