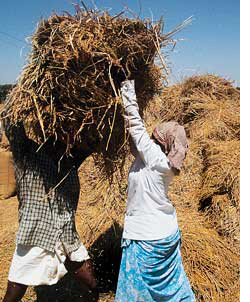 Season turns bad. No rainfall after planting, plenty after harvest

WEATHER played spoiler for paddy farmers in Kerala's Kuttanad region. During the growing period, when the plants need plenty of rain, a dry spell prevailed leading to black grain disease which reduced yield. Then, heavy showers for three days, soon after harvest, from March 12-15, drenched the paddy that lay in the open fields, waiting to be lifted. The delay by the civil supplies corporation in lifting and transporting the paddy to the mills led to further losses.

"There weren't enough vehicles to transport the paddy to mills assigned by the corporation, which procures foodgrain from farmers and sells them to consumers at subsidized rates fixed by the government," said Thomas Peelianickal of a non-profit in the Kuttanad region, which comprise Alappuzha, Pathanamthitta and Kottayam districts. Taking paddy to godowns costs extra, said Peelianickal.

Not just that, the chaff content, which should not exceed three per cent per quintal, went up to 25 per cent. "Since there were no rains during the growing period and the temperature was high, acidity and the salinity of the soil increased, affecting the plant's health and immunity," said Abraham Verghese, agronomist with the Rice Research Station at Mancompu, under the Kerala Agriculture University. "Chaff and black grain are a result of poor nutrition and low immunity level of the plant."

For procurement, moisture content in paddy should not exceed 17-20 per cent. Since the paddy was soaked, mill owners refused to take the paddy. A deal was struck. "Mill owners wanted the rotten grains and the chaff sifted. Since we did not have the mechanism for such segregation, we had to settle on their terms. Their final deal was a 10-20 per cent price reduction per quintal," said Jacob T Neendissery. He grows paddy on eight hectares in Alappuzha. Paddy in Kerala is usually procured at Rs 1,100 per quintal.

The farmers now want the state to compensate them for their losses.