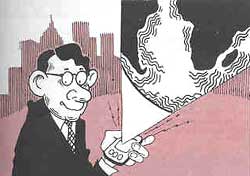 A DEVICE that fits in a shirt pocket but is still capable of displaying an image a metre wide is being developed by Motorola, the us communications company.

When the new high-tech pager hits the shelves in two years' time, it will usher in a new generation of messaging devices that can handle pictures, faxes, E-mail and even scan Worldwide Web pages from the Internet. The tiny 'image pager' could perhaps render mobile video-phones the popularity that mobile phones are enjoying today.

The pager, which measures 3 cm X 5 cm, is held before one's eyes and a lense system creates the illusion of a screen 130 cms away measuring 65 cm high x 100 cm.

"We call it a virtual display, "says Harry Hollack, director, Compound Semiconductor Technologies at Motorola's research laboratories in Tempe, Arizona, USA. Hollack heads a special team that seeks to introduce the virtual display to the market in 1997. Motorola believes it will revolutionise the market for hand-held pagers.

While small liquid crystal display (LCD) screens are familiar in pocket TVs and virtual-reality handsets, they are not effective for mobile applications because they consume too much power, which means they need bulky battery packs.

Motorola claims to have got round the problem by using an array of light emitting diodes (LEDs) and a lens design that allows displays to dispense with a back-lit screen. "The virtual display with LEDs consumes about one-third of the power used by a back-lit LCD screen," says Hollack.

According to Hollack, Motorola is working with other consumer electronics and communications companies that view this device as the key to a new world of mobile multi-media. As for the pager's development, "there will be something real interesting to show next year," he promises.

At the moment the device can display up to 14 lines of text, each able to hold 40 characters, or the equivalent in pictures or graphics. The prototype is monichrome and the quality of the resolution is only one-eighth of that on a standard computer monitor.

Hollack says picture quality will be twice as good the next year, followed by monochrome pictures Of VGA standard. He predicts that a colour version will be available by 1996.