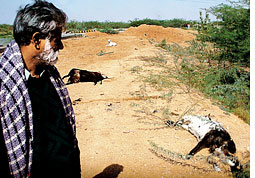 about 50 heads of livestock, mostly cattle, died in the last week of January after drinking water from a stream in the Ghaggar Union Council of Bin Qasim township on the outskirts of Karachi in Pakistan. Effluents from the nearby army-owned Fauji Fertilizer Bin Qasim Limited has polluted the water. The animals belonged to nearby tribal villages where cattle rearing is the main occupation. Residents of villages (called goths) Saleh Muhammad, Sodho and Rahim Dino told Down To Earth the deaths were a serious economic loss for people.

Tribal chief Pir Buksh Kaisrani Baloch pointed to the giant pipeline coming from the factory. It was emptying what looked like industrial waste into the Majnu Shah Dhori stream. "The factory discharges effluents all year round but sometimes, all of a sudden, it turns highly poisonous and our animals die," he said.

The Sindh Environmental Protection Agency inspected the site four days after the deaths were first reported. It found the storm-water drain from the fertilizer plant releasing pollutants into the stream, meaning the plant officials continued to release toxic waste despite knowing of the cattle deaths along the 10-km stretch leading up to the sea.

The polluted stretch is not fenced, nor does it have any signs to warn the villagers of the danger. Agency officials, accompanied by police officials, collected samples of the effluents as well as documented evidence of the plant's role in the pollution; they took photos of the storm-water drain from the plant emptying into the stream from which animals consumed the hazardous liquid waste and died.

The agency has realeased a report confirming that the cause of the animal mortality is pollution from the factory. Its director-general, Abdul Malik Ghauri, said a notice would be sent soon to factory officials. In case the reply is unsatisfactory, a case would be lodged in the environmental tribunal.

Factory officials were not available for comment. It is feared that any real action against the factory is unlikely because the army owns it. It is the only plant in Pakistan that produces dap and granular urea.

The agency found that the factory had released toxic waste with high concentration of ammonia. The ammonia level in the stream water was 1,400 per cent higher than the permissible limits set by the National Environmental Quality Standards.

It was 560 milligramme per litre, against the norm of 40mg/l. The chemical oxygen demand, a key indicator of pollution, was 194mg/l against the standard of 150mg/l.

The concentration of chlorides and total dissolved solids was within the permissible limits, and no traces of phenol and cyanide were found. The temperature of the contaminated water was slightly warm.

The fertilizer factory has a treatment plant for effluents, but its operational efficiency is questionable. Similar incidents had taken place in the past, too, though no report was ever lodged with the regulatory agency.

The stream carries the untreated waste straight to the sea. Tahir Qureshi of the World Conservation Union said that Gharo creek downstream is polluted also from effluents from Port Qasim, the industrial estate of which falls in the creek.