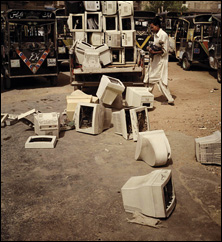 The Pakistan government is mulling a ban on import of used electronic goods, especially computers and its accessories. Electronic goods’ dealers and importers are against such a ban saying most Pakistanis can afford only used computers.

Environmental activists and academics said import of electronic goods should be regulated as many of the computers land in the scrap market where they are dismantled and recycled in a hazardous manner.

“Developed countries are dumping their e-waste in South Asian countries, including Pakistan, to save on labour cost,” said Khadija Qureshi, associate professor at the Mehran University of Engineering and Technology in Sindh province. Recycling a computer costs more than US $25 in the West; it costs less than a dollar in Pakistan, India and China, she said.

Former director of Pakistan’s environmental protection agency Shahid Lutfi said the government should ensure, through policy, obsolete computers are not imported. He said children and women hired to extract lead, copper and other metals from scrapped computers burn the unusable parts without being aware of the injurious health effects of the toxins in e-waste.

An estimated 500,000 computers worth US $25 million are imported in Pakistan every year, mostly from the US and the UK, as per estimates given by the Karachi Electronic Dealers Association. Karachi is the trading hub for all electronic goods and second hand computers.

Junaid Iqbal who works in a scrap market in Karachi said 90 per cent of the imported machines are usually in working order. “We sell the functional machines to electronic dealers,” he said while adding the dismantled parts are sold to different buyers who recycle it for further use. Mother boards of scrapped machines fetch Rs 250 a kg while the cpu tin body fetches Rs 40 a kg, said Junaid. He claimed assembling and dismantling electronic goods is completely safe.

Arshad Janjua, general secretary of Pakistan Computers Association, said 80 per cent people aspiring to buy computers in Pakistan settle for second hand ones. Most of the imported computers are only three to four years old, said Janjua. He admitted that about 10 out of 100 imported computers end up as scrap. He conceded there is no recognized recycling market for the junked computers.

Tahir Qureshi, environmental expert associated with the International Union for Conservation of Nature (iucn) said there is an urgent need to enact a legislation to control e-waste dumping in Pakistan as there is no recyclers’ market for these products. Many of the used computers are disposed of in landfills.

A recent study found electronic- waste contributed to approximately 40 per cent lead in the landfills.