Palberi adds another no to mining in Niyamgiri

Attending Member of Parliament asks Odisha government to include 112 villages 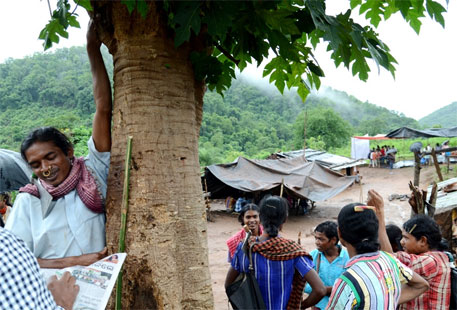 The fifth palli sabha, taking a cue from previous ones, unanimously rejected proposed bauxite mining inside Niyamgiri hills. The village council meeting was held at Palberi village in Kalahandi district of Odisha. Fifteen of the 16 adult voters from the forest village were in attendance. All spoke against mining and asserted their religious and cultural rights over the entire Niyamgiris, spread across Rayagada and Kalahandi districts.

“Niyamgiri was not given to us by Central or state government. It belongs to Niyamraja (hill deity). Does not matter who made your laws; the law of Niyamraja runs here,” said Jilu Majhi, a Kutia Kondh tribal from the village. The Dongria Kondh and the Kutia Kondh tribals worship Niyamraja as their protector and provider, their supreme deity and ancestral kin, who presides over Niyamgiris, the mountain of law.

The village residents also rejected two community claims filed under the Forest Right Act and instead asserted their rights over the entire Niyamgiris. “We only buy salt and kerosone from outside. Everything else we need is here. My God is spread all over these hills. No one messes with him,” said an angry Gata Majhi, a woman in her seventies, pointing fingers at the dais.

Following up on the Supreme Court order of April 18, the Odisha state government selected 12 villages—seven from Rayagada and five from Kalahandi district—to take a call on the proposed bauxite mining in the Niyamgiri hill range and whether it will infringe on their religious and cultural rights. A joint venture of the Orissa Mining Corporation Limited (OMCL) and Sterlite Industries, the Indian arm of the London Stock Exchange-listed Vedanta, want to mine the hills for bauxite, to feed Vedanta’s alumina refinery on the foothills of Niyamgiri hills at Lanjigarh.

Despite objections from tribal and non-tribal forest dwellers of Niyamgiri hills and the Union ministry of Tribal Affairs, the state government of Odisha stuck to its list of 12 villages to hold palli sabha meetings between July 18 and August 19. “The Odisha government should hold palli sabha’s in all 112 villages spread across 240 sq km of Niyamgiri that is worshipped by the tribals,” contended Bhakta Charan Das, the local Member of Parliament from the Congress who attended the palli sabha meeting at Palberi. 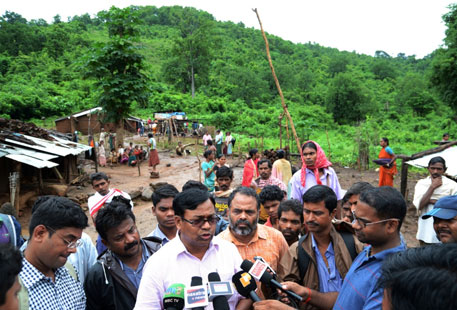 Speaking to journalists later, Das asserted, “the state government has violated provisions of the Fifth Schedule of the Constitution by not taking the consent of all tribal villages on proposed mining. It has also tried to create a divide by proposing the hill top of Hundijali as the sole place of worship when the tribals worship the entire hill range.”

During the palli sabha, district judge Pramod Kumar Jena, appointed observer by the Supreme Court, intently listened to the speakers, scribbling notes. Sulochana Gouda, the panchayat ward member sat on the extreme left, looking diminutive, though she was the one presiding over the meeting. “With a Member of Parliament attending, the four pillars of democracy has come to this remote village,” quipped a journalist. 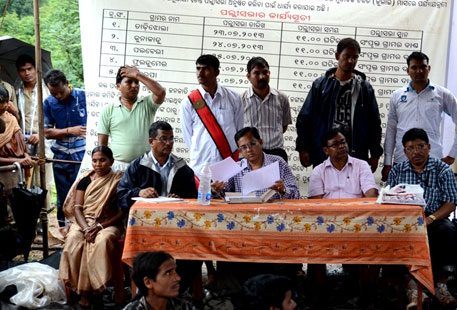 Next to the meeting venue, this correspondent spoke to the local block development officer (BDO), Prabir Nayak. “We have been trying to build roads for remote forest villages but the residents object. Getting contractors to execute project is also a challenge,” he said, in an obvious reference to the presence of Maoists in the area. Every palli sabha meeting in Niyamgiri is held under heavy security cordon of the Central paramilitary forces, state special operations group and the state police.

“We walk up the hills. We don’t have cars or bikes. What will we do with roads?” retorts Lado Sikaka, the feisty leader of Dongria Kondh tribals. Sikaka is not worried his name is chucked out from the voter list of Lakhpadar, the forest village he belongs to where the palli sabha will be held next month. “Doesn’t matter what their list says. I will speak. This place belongs to us.” 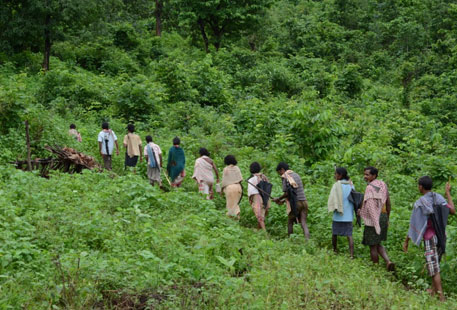