Vitamin E gives protection against heart disease and slows the ageing process, among other benefits 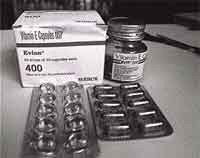 reports of the benefits of vitamin e have caused considerable interest in the medical community in the last few years. Vitamin e supplements have been called the magic pill of the 90s by some physicians. And though previous declarations of such magnitude have caused controversy, as in the case of vitamin c, scientists are yet to find any evidence of side-effects. Researchers are increasingly finding new applications and advantages of vitamin e supplements. Sales of the pills have risen manifold in the last five years.

The most important benefit of the vitamin is prevention of cardio-vascular disease. Widely conducted studies have revealed that vitamin e stops the oxidation of bad cholesterol or low density lipoproteins, which is the initial step in a chain of reactions that cause blockages in arteries.Vitamin e is an antioxidant. It fends off the destruction caused by unstable oxygen molecules (known as free radicals) that are harmful to tissues in the body.

Free radicals are caused by natural biological processes, smoking, toxins and pollutants. They can also lead to cancer. As vitamin e is an antioxidant, its usefulness in combating cancer can hardly be undermined. It can also help battle the effects of pollution. A recent study revealed that vitamin e can also boost resistance to infection. Results also indicate that it delays the progression of Alzheimer's disease.

However, unlike other vitamins, vitamin e is not found sufficiently in food to provide the benefits. It is commonly found in oils, oil-rich nuts and seeds. But these are some of the richest sources of fats. Consumption of these in large amounts to provide the vitamin would pave the way for a large number of problems associated with high-fat diets. This is the reason that vitamin supplements in the form of pills are the best alternative available at present.

Even those who are not sure about there being no side effects to the supplements, agree to its benefits. "For healthy people, there is virtually no evidence of downsides of vitamin e in the doses commonly used, says Walter Willet, chairperson of the department of nutrition, Harvard School of Public Health.

Previous experiences show that side effects of highly publicised drugs were noted after their use had reached proportions beyond control. So the entire approach to vitamin e is more cautious. But the scientific community is hard pressed to find any reasons why people should not be taking the vitamin e supplement pills. Many well-known physicians who opposed the administration of vitamin supplements have turned around in the case of vitamin e.