Panchayats to get poverty alleviation funds 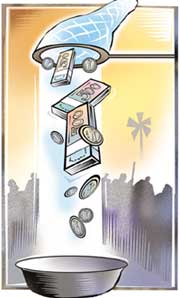 The Union government is about to substantially cut down the number of poverty alleviation programmes it runs. Known as the centrally-sponsored schemes (csss), these projects have long been criticised for being out-of-sync with local governments. So, a high powered committee constituted by the Planning Commission has recommended that panchayati raj institutions (pris) play a major role in implementing csss. The Union government will implement only a handful of the 214 poverty alleviation programmes, if this committee chaired by former bureaucrat Arvind Verma has its way.

The committee's recommendations might well be implemented in the 11th Five-Year Plan that begins in 2007-2008."We are demanding a further reduction in the centre's role in css operations," Union minister for panchayati raj (mopr), Mani Shanker Aiyar, said at the release of his ministry's mid-term review reports.
Currently, several ministries or departments run 214 poverty alleviation schemes with an annual outlay of more than Rs 36,112 crore (2004-05 budget estimates). A mere 18 of these schemes constitute more than 87 per cent of total central government assistance at a total outlay of Rs 31,490 crore.

One of the mandates of the Verma committee was to look into such irrationalities. Orienting poverty alleviation programmes to the functions of pris was another task assigned to this planning commission-appointed body. It has recommended that

• csss be reoriented to fit the constitutional functions of local bodies

• The Planning Commission to rate each state into three categories--with per capita income higher than national average, lower than national average and special category states--for differential allocation of funds
A review on the working of csss was long overdue. Critiques of these schemes have argued that most of them are planned independent of pris and have self-contained fund flows and monitoring systems. This leaves very little scope of convergence with development schemes at the local level

When the mopr was set up in 2004, tuning the csss according to the constitutional functions of the pris became imminent. An expert group set up by mopr for suggesting an action programme for local level planning in the 11th five year plan recently noted "There are too many schemes and there is no consistent approach to institutional mechanisms for implementation of various related schemes." It noted that poverty alleviation programmes should

• Focus on supporting panchayat for identifying the poor

Union finance minister P Chidambaram had in his budget speech for 2006-07 stated that the bulk of the Centre's resources would go to eight flagship programmes such as National Rural Employment Guarantee Programme, Sarva Shiksha Abiyan, Mid-Day Meal Scheme, Drinking Water Mission, Integrated Child Development Services and others. It is believed that all css would be redistributed among these flagship programmes.

However, mopr and ngos working on panchayat empowerment demand more than just an administrative rationalisation of centrally-administered poverty alleviation programmes. "Only pruning would not help. Traditionally, csss have been pushing panchayats to the periphery and these schemes have high administrative and maintenance cost as well," says Manoj Rai, national coordinator for panchayati raj with the New Delhi-based Participatory Research in Asia.

"The state governments as well as various ministries have not taken concrete step to integrate pris in planning the implementation of central supported schemes. Various schemes are invariably implemented through vertical bureaucratic formations," George Mathew, director of New Delhi-based Institute of Social Sciences says while demanding that all the development resources must be channelised through panchayats.