One bout of warm weather could release mayhem: ancient viruses lying trapped in the polar ice 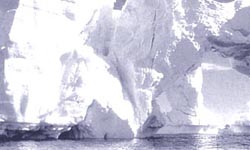 the threat from the melting of polar ice caps is not restricted to a rise in sea levels. Recent studies reveal that ancient viruses are lying trapped in the polar ice. One bout of warm weather might be all that is required to release them into the environment. And the possibility of these viruses causing epidemics is very real after an ancient virus was discovered in the Arctic ice for the first time. The finding means that there could be other viruses, such as ancient strains of flu, polio and small pox, lurking in the ice. "We do not know the survival rate or how often they get back into the environment. But it certainly is possible," says Tom Starmer of Syracuse University, New York ( New Scientist , Vol 163, No 2202).

The virus that was isolated is known as tomato mosaic tobamovirus ( t o mv ). A common plant pathogen, it was found deep within the Greenland icepack. Scott Rogers and John Castello of the State University of New York have already found t o mv in clouds and fog. What enables the virus to survive in such extreme climates is that it belongs to a family of viruses with extraordinarily tough protein coats.

"Since it is widespread, moves in the atmosphere and is very stable, we deduced we would find it in the Arctic ice," says Rogers. The scientists examined four cores containing ice between 500 and 140,000 years old from three sites in Greenland. The outside of each core was disinfected with ultraviolet light to avoid its contamination. The researchers then used polymerase chain reaction ( pcr ) to search the inner core for ribonucleic acid ( rna ) from t o mv . They found the virus. Moreover, sequencing of the genetic material revealed 15 strains of the virus. The frozen viruses were probably still infectious, though this could not be ascertained as the pcr technique destroys the organism to amplify their genetic material ( Polar Biology , Vol 22, No 207).

The scientists could not establish whether the viruses had retained the protein codes that help them invade cells. Castello, however, points out that in all probability, the viruses needed the coat to survive for hundreds of years in the ice. The researchers are of the opinion that a brief rise in temperatures could release the viruses, opening a veritable Pandora's Box. "The ice is melting constantly around the poles," says Rogers.