A special committee is being set up to solve clashes between the industrialised and developing countries over national and international gains in environmental projects. 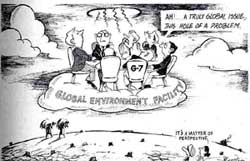 THE NEW Global Environment Facility (GEF) fund is getting bogged down by wrangles over how to distinguish between national and international benefits in environmental projects. After disagreements surfaced at a GEF-sponsored workshop in Delhi in February, GEF administrator Ian Johnson proposed setting up a special committee to thrash out the problem and submit its report to the next GEF meeting in June in Beijing.

The Delhi discussions also brought out major North-South differences on other issues, leading Johnson to comment, "It is much more difficult than we earlier thought."

An NGO (non-government organisation) participant, however, expressed surprise at Johnson's comment, given that GEF was rushed into existence by industrialised countries seeking to pre-empt Southern demands at the Rio Summit for a Green Fund.

Though attempts have been made since Rio to meet some of the South's criticisms against the GEF structure, the Delhi workshop brought into the open disagreements about the way GEF should assess and fund projects.

The issue of "incremental costs" -- essentially, the global benefit of a project after subtraction of the national benefits for the country in which the project is based -- produced no consensus. One Northern argument was that for a developing country to receive GEF funds purely for its own benefits is tantamount to cheating. "For example, a government could maximise net transfers for reductions in greenhouse gas emissions by maintaining fossil fuel subsidies," said Ken King, senior GEF environmental specialist.

Later, however, he admitted that prior experience did not warrant such suspicions. China and Mexico have even voluntarily agreed to waive the grace period allowed them to phase out ozone-depleting substances under the Montreal Protocol.

The precise formulation of incremental costs is likely to be worked out on each individual project, but the Delhi workshop showed the aim was to finance measures that do benefit the global environment but do not provide a reasonable rate of return in the national context. The example cited was a project that would use natural gas instead of coal, which would help cut carbon dioxide emissions not only through fuel substitution but through improved fuel efficiency. By saving fuel, the project also would directly benefit the country in which the switch is made. So GEF could be asked to pay for the total cost minus the local benefits, such as the value of saved fuel.

However, the Delhi discussions raised a controversy over the definition of local and global benefits. Some participants contended training with its long-term benefit for the recipient country, should be counted as a local benefit and its costs subtracted from the global costs. Another argued that as GEF aimed to reduce global environmental problems, which was not a priority for developing countries, the South should not be asked to pay for local benefits arising from such projects. "Carbon dioxide reduction is not a priority for developing countries," explained Jyoti Parikh of the Indira Gandhi Development Research Institute in Bombay. "So the benefits to the receivers should not be subtracted; otherwise you will have no enthusiasm for such projects."

Apart from the difficulties of working out the exact costs and benefits on each project, a GEF paper prepared for the workshop noted the additional complication of assessing a baseline further into the future. If a country was to be compensated for the incremental cost of using a compressor equipped with an ozone-friendly refrigerant HFC-123a, in place of an ozone-damaging compressor, what would be a just price for the old compressor in 2010, when it was no longer in production?

Country studies also proved contentious, with speakers from developing countries voicing suspicions of the studies. Noting the studies are sponsored and occasionally led by Northern government agencies and international institutions, some of these speakers branded them to be a mechanism for monitoring the use of GEF project funds.The overt objective of these studies ostensibly is to identify national policy options for reducing greenhouse gas emissions, but Mukul Sanwal of India's environment ministry, pointed out "there is no mention of country studies" in the Convention on Climate Change, which was negotiated simultaneously with the Rio Summit and for which, GEF is the funding mechanism.

The Delhi workshop made clear that developing countries are worried about the manner in which data and information collected by the studies are put to use. For example, there are studies making inventories of greenhouse gas emissions and "sinks", such as forests, that soak up carbon dioxide, despite a continuing international debate underway about who should benefit from sinks. Will these studies be used, for example, to help industrialised countries avoid the obligation to curb their emissions?

The studies, some pointed out, could be used also to shift the focus from the north's industrial emissions to the South's agricultural emissions, such as methane. This was lent weight by an Oslo University review, to which reference was made in a workshop paper, that stated, "In some studies for Asian countries sponsored by the Asian Development Bank, adaptation measures in agriculture, forestry, water management and the residential sector are also included."

The question of ownership of country studies was raised by Tariq Banuri of Pakistan's Sustainable Development Policy Institute. "Is it the multilateral agencies sponsoring the studies or the developing countries who own them?" he asked. A UN Environment Programme study of the capacity of the Amazon rainforest to act as a net carbon dioxide sink and the effects of deforestation, was cited as an example. It was pointed out that even if Brazilian scientists considered the study biased or inaccurate, institutional or other bottlenecks might delay their response and the result would be that Brazil might be forced to work with the disputed UNEP findings in its dealings with GEF.

In addition, armed with such studies, GEF might be in a position to dictate the opportunities and conditions of projects dealing with greenhouse gas emissions. Some workshop participants pointed out that developing countries might be so desperate for funds, they would not be in a position to argue for projects based on their own priorities.

Concern was expressed about GEF plans to rank possible projects in terms of cost-effectiveness. Participants said because this would create competition for funding, and some countries might distort national priorities. Several participants voicing concern over GEF's narrow focus noted that a solar power project might produce no greenhouse gas emissions, but have other undesirable side-effects, such as production of toxic waste. Nevertheless, this would count for nothing in GEF funding.