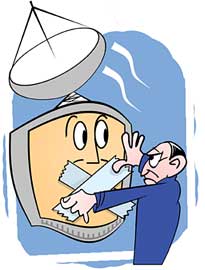 The continuing unrest over the Amarnath land transfer seems to have driven the Jammu and Kashmir administration to panic. On August 3 Jammu administration blacked out two local tv news channels and sealed the offices of two Hindi dailies for allegedly whipping up communal passions. Chief secretary S S Kapur said action was taken against the media houses which defied the official advisory.

"They were repeatedly asked not to telecast provocative content," Kapur told the Times of India. He said the channels were violating the programme code under the Cable Network (Regulation) Act, 1995. "The administration had earlier issued notices to the channels, but they kept on transmitting provocative material," Kapur said. The ban was revoked on August 4.

Kapur said that there were no restrictions on other channels. But since the two channels are also cable service providers, the transmission of other channels was disrupted.