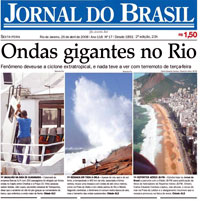 Amore-than-a-centuryold Brazilian daily has become the latest in the long line of newspapers that will only have an Internet edition.

From September 1, Jornal do Brasil will discontinue its print edition, Nelson Ta nure, the owner of the 119-year-old newspaper, said on Wednesday.

Published from Rio de Janeiro, the once-influential paper has lost thousands of subscribers amid financial woes and turmoil in the editorial offices. Though founded by monarchists unhappy with Brazil’s transition from empire to republic, Jornal do Brasil became a champion of human rights during the country’s 1964-1985 military dictatorship. The paper’s circulation, which touched 150,000 copies per day in the 1980s, is down to 21,000.

Media watchers in Brazil said Jornal do Brasil has debts totalling 800 million reais (US $455 million). “We regret the passing away of the Jornal do Brasil as a standard in Brazilian journalism and a great school for journalists, but that happened due to business mistakes,” the director of the Brazilian Periodicals Association said.