A parasite found in locust hindgut inhibits its ability to swarm 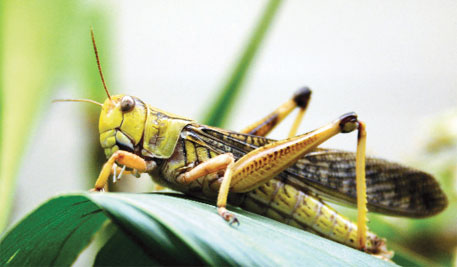 LOCUST swarms destroy crops and threaten the livelihood of millions. The problem is more severe in Asia and Africa because locusts, which belong to grasshopper family Acrididae, breed easily in warm, moist conditions, assemble in massive groups, eat more and cover vast areas.

According to a new study, the microsporidian gut parasite, Paranosema locustae, can be used to check the swarming behaviour of migr atory locusts and control locust plagues.

Researchers found that the parasite causes hindgut acidity and controls the locust’s immune response, which suppresses growth of the hindgut bacteria.

These bacteria are behind the production of the aggregation pheromone (che m icals released in the locust’s faecal pellets which encourage swarming beha v iour in other locusts). Reduction in hindgut bacteria and the consequent reduction in the aggregation pherom one cause a drop in serotonin and dopamine levels__the neurotransmitters which initiate and maintain swarm behaviour.

The experiments were conducted by exposing uninfected locusts to glass chambers containing faecal volatile chemicals from both healthy locusts and locusts infected with Paranosema. The locusts aggregated more and displayed a higher antennal response to uninfected faeces compared to infected faeces.

The research was led by Wangpeng Shi from the department of entomology, China Agricultural University, Beijing, and published in the January 14 issue of Proceedings of the National Academy of Sciences.

Carlos E Lange, research scientist working at the Centre for Parasitological Studies and Vectors in Buenos Aires, Argentina, notes that the parasite has already been introduced to affect outbreaks of locusts in parts of Argentina and China with positive results. He adds, “The Environmental Pro t e ction Agency of the US and its Canadian counterpart consider it safe enough for commercialisation. Other organisms are not known to be affected by Paranosema locustae.”

But Gregory A Sword, professor, department of entomology, Texas A&M University, US, says, “The role of aggregation pheromone in mediating the initial attraction, subsequent phase change and swarm formation is considerably overstated in this article. Olfactory cues, including the faecal volatiles examined here, can play a role, but are overshadowed in importance as a cue by direct physical contact.”