It's hard to picture paddy fields without water puddles. But by draining flooded rice fields for two days before the flowering stage, methane emissions can be reduced by as much as 56 per cent. Significantly, draining deprives methane-producing microorganisms of the oxygen-starved conditions they thrive in. This is what results of a study conducted by the environmental science division of the National Botanical Research Institute, Lucknow, suggest 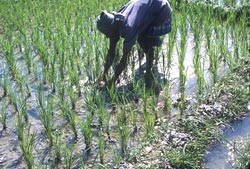 it's hard to picture paddy fields without water puddles. But by draining flooded rice fields for two days before the flowering stage, methane emissions can be reduced by as much as 56 per cent. Significantly, draining deprives methane-producing microorganisms of the oxygen-starved conditions they thrive in. This is what results of a study conducted by the environmental science division of the National Botanical Research Institute (nbri), Lucknow, suggest.

Research done by the Institute for the Study of Earth, Oceans and Space, University of New Hampshire (unh), usa, bears out nbri's findings. It goes a step further and points out that changes in water management in China during 1980-2000 have not only reduced methane emissions, but also led to an increase in rice yield.

Methane is a heat-trapping gas that causes global warming. Worldwide, flooded rice fields are responsible for around eight per cent of the annual emissions of the gas. Forty-two million hectares of rice fields in India release about 3.61 million tonnes of methane each year.

One of the best results (61 per cent decrease) was seen in fields where water was drained after rice-straw or biofertilisers had been applied (see table: Stark contrast). Sundari was found to be the least polluting variety.


Researchers contend that draining water is an ecofriendly and cost-effective way to decrease methane emissions, even though certain chemical fertilisers produce better results purely in terms of reducing methane emissions. "The yield is also not affected due to the draining," says S N Singh, lead author of the nbri study. However, the method means more pressure on water resources.

Interestingly, China has a different story to tell. According to the study by unh, new management techniques have saved water along with reducing emissions of rice fields. The researchers evaluated farming practices of Chinese farmers. During the last two decades, water shortage has forced Chinese farmers to allow their rice fields to be drained two to five times when the crop is being grown. The catch is that fields are not literally drained and flooded again as was done during the nbri study. "The Chinese farmers just let the fields dry naturally due to evaporation and/or leakage. Unlike in other parts of the world, they don't flood the soil again until it is dry. In the process, they save a lot of water," explains Changsheng Li, the lead author of the unh research.

A significant, though unintended, consequence of this shift in farming practice was an annual decrease of about five million tonnes of methane emissions during 1980-2000. The practice actually resulted in higher yields, as draining stimulates the development of plant roots and also accelerates decomposition of organic matter in the soil. This in turn, produces more inorganic nitrogen -- an important fertiliser.

Changsheng and his colleagues observed that reduction in methane emissions varied greatly with time and location. A biogeochemical model was developed to take into account the main factors related to methane emissions such as weather conditions, soil properties, crop types, tillage, fertiliser use and water management. The researchers found that irrespective of any of these factors, on an average, methane emissions decreased by about 40 per cent if the fields were drained thrice during a growing season.