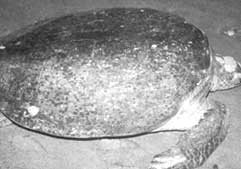 Malaysia's Sea Turtle Research Unit (SEATRU) has come up with a novel concept to stabilise the dwindling turtle population: adopt a nest for a fee of rm 200, or a turtle for rm 100. If the proposal sounds appetising, turtle lovers can contact SEATRU at Pulau Redang, Terengganu, in Malaysia where about 300 nests and 60 turtles are waiting to be adopted. So far only 101 nests had been taken up by individuals and private companies.

SEATRU project leader Chan Eng Heng hopes to retain all the nests deposited until end of August for incubation. "For the conservation effort to be successful at least 70 per cent of the nests out of every season should be protected and allowed to hatch. Between April 8 and August 19, 377 nests were deposited by the green turtles while 10 were laid by the hawksbill turtles," Chan said.

Several people have already expressed their interest to either adopt a nest or a turtle following an article in The Star daily which appeared on August 18.

SEATRU, a research arm of the Applied Science and Technologies Faculty under University Putra Malaysia Terengganu had released 124,000 hatchlings through the programme to steady the dwindling population since 1993. It is also involved in a long-term tagging plan simultaneously to study the habits of the creature.

Turtle egg consumption is threatening the survival of these endangered species that nest in selected beaches in the country. In this season alone, the eggs of 18 nests have been collected for sale or consumption.

Chan said public support for the project was important as SEATRU only received rm 10,000 sponsorship money each from the state government and the World Wide Fund for Nature.