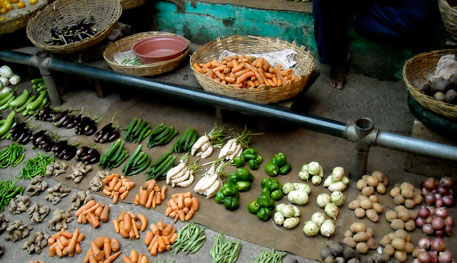 The internal differences between ministries and government departments on producing transgenic crops has become public following the tabling of report of the parliamentary standing committee on agriculture in Parliament.

The report, Cultivation of Genetically Modified Food Crops—Prospects and Effects, was tabled in the Lok Sabha by the committee's chairperson, Basudeb Acharia, on August 9. The report has classified various government ministries and departments into those that support GM crops and those that don’t. The report also points out that some ministries have admitted to loopholes in the regulatory system and concede that the country is not yet ready to introduce GM food crops.

Ministries and departments that support GM crops are: Ministry of Environment and Forests, Indian Council for Agricultural Research (ICAR), Department of Biotechnology (DBT), Ministry of Science and Technology and Indian Council for Medical Research (ICMR). They have expounded he virtues of transgenic technology, informing the parliamentary committee that it is needed to feed India’s population which is expected to reach 1.5 billion by 2025.

The report is based on scientific studies and oral evidences of scientists, officials, farmer groups, activists and industrial groups, and field visits made by committee members. The report states that the committee has made its observations and suggestions following critical analysis of evidences placed before it both for and against the transgenic food crops. Apart from scientific evidences, the committee has also considered the point that India is one of the richest centres of biodiversity, providing agricultural sustenance to almost 70 per cent of its rural populace, mostly comprising small and marginal farmers. For these farmers, “agriculture is not a commercial venture but a way of life and a means of survival; food security and safety,” says the report.

ICAR, the premier authority of the country for public research in agriculture, says transgenic crops are “eco-friendly and sustainable by nature”. It sees many merits in genetically tweaked crops: “They are protective to environment and biodiversity; increase productivity, thereby, contributing to national food, feed- and fibre-security, lower production costs; conserve biodiversity as a land saving technology capable of higher productivity on a per unit land basis; efficiently utilise inputs such as fertilisers and water, increasing stability of production to lessen suffering during famines due to abiotic and biotic stresses, improving economic and social benefits, ensuring safer human health through reduction of chemical inputs in agriculture along with safer soil, water and food.” ICAR's opinion is supported by DBT and Ministry of Science and Technology, which argued that success of transgenic crops cultivation can be seen in countries like the US, Argentina and China.

However, DSIR and CSIR, which are under the Ministry of Science and Technology, seem to have apprehensions about the technology and argue that more research is required before arriving at a final decision on introduction of transgenic food crops. CSIR agreed that Indian research and regulatory system was not strong enough right now to introduce transgenic crops as it would involve matters related to biodiversity, bio-safety, environment, human health, flora and fauna and longer term as well as short-term perspective.

Secretary general of DSIR and director general of CSIR stated that in countries like America or Europe, cited by GM-lobby in their support, every food item is packed and labelled, which is impossible in India. “Therefore, it becomes more of a responsibility of the government to be sure about it. One cannot subject people to risk. The issue is not just the risk to people also. The issues are: are you risking biodiversity and are you risking soil bacteria to become antibiotic resistant? Those are more serious issues. You are not talking about this generation of people who will eat the brinjal, but you are talking about the next generation of children who will live on Earth. Therefore, we have no choice. In the 1950s and 1960s, when we have had famine, we had to put pesticides and we put so much of pesticides that we cannot get over its effects even today. We also had to put DDT. We overdrew water in Punjab, Haryana, and northern parts of India for green revolution to give hungry people food, and the water table has gone down there. We have over-irrigated in some places; as a result, you have to go down much deeper to get drinking water and there you get fluorine. So, every decision of the government, however positive or good intentioned it is, can have a consequence. That is why a wise body like this has to sit down, debate and discuss. We need to get everybody’s point of view. That is why it is important that we debate this issue, look at this issue longer, before we take any disruptive decision very quickly.”

International non-profit Greenpeace and the Coalition for a GM-Free India, a consortium of Indian non-profits and various organizations opposing transgenic crops in India, have welcomed the parliamentary standing committee report and have asked the Indian government to stop field trials of trangenic crops immediately.

The anti-GM lobby called the report a “historic, comprehensive and well-grounded” document that would help the Union and state governments to change their perspective on transgenic crops. Coalition convener Sridhar Radhakrishnan says the report clearly states that the government’s views are uninformed and biased on the matter and that’s the reason why they are blindly promoting it. The report vindicates the concerns and positions taken by many state governments in India, such as Bihar, Kerala, Madhya Pradesh and Chattisgarh, which have disallowed GM crops, including field trials. It also vindicates the larger public demand not to allow GM crops into our food and farming systems.

Radhakrishnan adds that the standing committee has gone into the finer details of this controversial technology and studied it from all angles, including the socio-economic, so that the interests of the Indian farmer are upheld. The report looks at regulation and its shortcomings and questions the Ministry of Agriculture on its policies related to transgenics in Indian agriculture. “The Coalition sincerely hopes that the nation as a whole takes pointers from this analysis and requests law makers and the government to throw out the deeply flawed Biotechnology Regulatory Authority of India (BRAI) Bill and start at the drawing board afresh, with the correct mandate and therefore, the correct ministries,” he says.

The Coalition hopes the report will form the basis for a deep and widespread debate on the subject of genetically modified organisms in food and farming. Incidentally, India this year is hosting the Convention on Biological Diversity’s COP-MOP in Hyderabad. “We hope that this report will guide the thinking in other countries as well, including our neighbouring countries with similar socio-economic conditions for their farming communities”, adds Radhakrishnan.